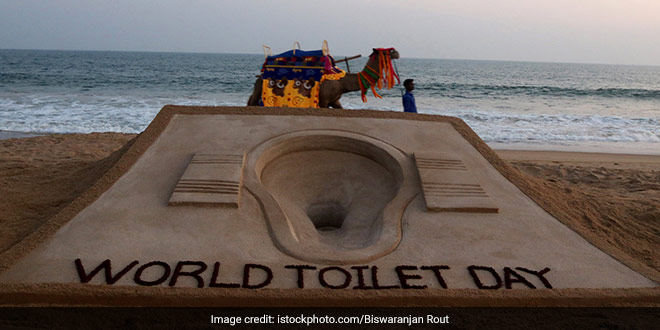 This year, the theme for World Toilet Day is Valuing Toilets

New Delhi: “Who cares about toilets? 3.6 billion people do. Because they don’t have one that works properly,” states United Nations. It further adds that life without a toilet is dirty and dangerous and government’s investments can bring five-fold returns in health, productivity, education and jobs. United Nations also adds that right now, the world is off track to meet Sustainable Development Goal 6, which is to ensure toilets for all by 2030. It also states that global targets of health, education, gender equality, economics and environment are at serious risk. It also says that governments must quadruple progress to meet this sustainable development goal.

This is the starting point of the 2021 Campaign for World Toilet Day, which is observed every year on November 19. As the world marks World Toilet Day, here is a quick lowdown of things you should know about the day:

Watch: Author Mark Balla On His Experience Of Building Toilets In Schools In India

World Toilet Day – How Did It Came Into Existence

Back in 2001, with the idea to raise awareness about sanitation, hygiene and how poor sanitation can kill the masses and cost millions to the economy, a Singaporean businessman Jack Sim started a crusade for better sanitation and hygiene practices around the world and founded the World Toilet Organisation. He was the one to declare November 19 as the World Toilet Day. Then in 2012, the first slogan associated with World Toilet Day came out, which was, “I give a sh**, do you?” in a bid to make people aware about this crucial topic of sanitation. Later, in 2013, the United Nations adopted the day to educate billions who suffer the ill effects of open defecation.

Also Read: How WASH Programmes Are Improving Lives Of Children

Each year the day is celebrated with a unique theme. This year, the theme is Valuing Toilets. The theme aims to educate masses that we all must care about toilets and do our bit to ensure everyone has access to safe sanitation and toilet by 2030 and help the world achieve Sustainable Development Goal 6: water and sanitation for all by 2030.

According to World Toilet Organisation, World Toilet Day is marked as a day to strengthen the “global voice” on sanitation issues and focus on raising awareness about the importance of sanitation for everyone, everywhere.

This year the objective of the day is to raise awareness that we urgently need massive investment and innovation all along the ‘sanitation chain’, from toilets to the transport, collection and treatment of human waste, states the United Nations.

United Nations also adds that as part of a human rights-based approach, governments must listen to the people who are being left behind without access to toilets and allocate specific funding to include them in planning and decision-making processes.

The Importance Of Safe Sanitation

World Health Organization says that inadequate availability of water, sanitation, and hygiene results in 8,27,000 deaths in low- and middle-income countries each year.

United Nations added that the benefits of having access to an improved drinking water source can only be fully realized when there is also access to improved sanitation and adherence to good hygiene practices. Talking about the current situation, it states that today, 2 billion people lack access to safely managed drinking water services and 3.6 billion people lack safely managed sanitation services. United Nations add that the impact on child mortality rates is devastating with more than 700 children under five who die every day from diarrhoeal diseases due to poor sanitation, poor hygiene, or unsafe drinking water.

In Pics: Handwashing, A Vital Defense Against COVID-19, But Billions Don’t Have Water To Wash Hands

Status Of Sanitation In India

UNICEF says India has made rapid progress in ending open defecation across the country. It adds, “Just a few years ago, in 2015, nearly half of India’s population of around 568 million people suffered the indignity of defecating in fields, forests, bodies of water, or other public spaces due to lack of access to toilets. India alone accounted for 90 per cent of the people in South Asia and half of the 1.2 billion people in the world that defecated in the open. But, by 2019, the number of people without access to toilets reduced significantly by an estimated 450 million people.”

UNICEF further said that going forward, it is important to ensure that there is sustained usage of toilets by, all at all time.

UN Backs Plans To Ensure Regular, Healthy School Meals For Every Child In Need By 2030