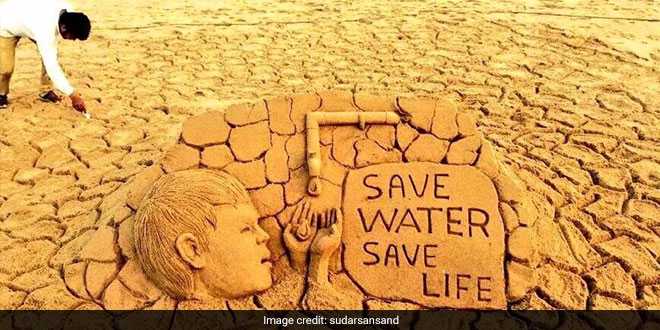 New Delhi: On World Water Day that is celebrated across the world on March 22, Internationally-acclaimed sand artist Sudarsan Pattnaik spreads the message among people about the importance, need and conservation of water through his sand artwork. Showcasing the unfortunate plight of a child who is struggling to get a few drops of water, along with the message ‘Save Water, Save Life’, the Padma Awardee, Sudarsan Pattnaik made the sand sculpture.

Sharing the message with netizens through his social media, Sudarsan Pattnaik said,

Every drop of water is important for the survival of living beings on our earth.

Every drop of water is important for the survival of living beings on our earth. #SAVEWATER #SAVELIFE I am sharing one of my SandArt On the occasion of #WorldWaterDay pic.twitter.com/qr0Z9BqdVw

This is not the first time sand artist Sudarsan Pattnaik has created a sand art with a message for the environment. The artist is well known for creating sand sculptures around the theme of Swachh Bharat Abhiyan – from open defecation free to waste or garbage free India, Mr Pattnaik time and again has helped sensitise people about the importance of keeping the environment clean and green.

The artist is also known for making some of the magnificent and gigantic sculptures on the beaches – on the occasion of Christmas, Sudarsan Pattnaik created a Santa Claus using 10,000 waste plastic bottles on the Puri beach in Odisha to sensitise people about the dangers of indiscriminate use of plastic.

Wishing everyone a #MerryChristmas . On the eve of #Christmas⁠ ⁠ through installation of 30ft high & 100ft wide #SantaClaus on Sand with 10 thousands Plastic bottles. Let’s get #readytochange and #BeatPlasticPollution to save our #Environment . pic.twitter.com/gXcj1XisYY

Whereas, on World Environment Day, the artist created a sand turtle art that was 50ft long and 30ft wide. The unique thing about the art was that it is made using 300 kilograms of plastic bottles to send out a strong message – #BeatPlasticPollution.

Water Crisis In India: Facts You Should Know

According to the government think tank – NITI Aayog, 600 million Indians face high to extreme water stress and about two lakh people die every year due to inadequate access to safe water. The recent report by the NITI Aayog also highlighted that 21 Indian cities will run out of groundwater by 2020.

The same report also stated that as much as 70 per cent of India’s water is contaminated due to lack of water management.

On the other hand, Ministry of Drinking Water and Sanitation states that about 10.06 crore population are consuming water with excess fluoride, which can cause fluorosis that affects the teeth and bones.