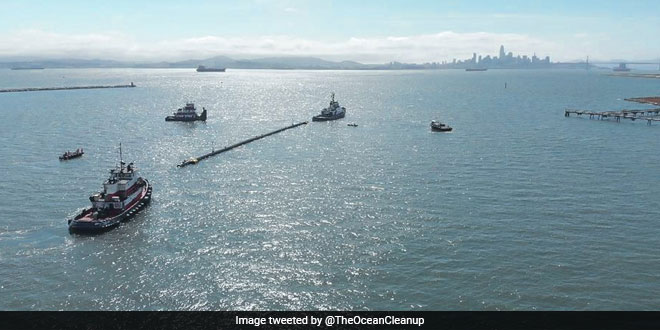 New Delhi: There are over 1.8 trillion pieces of plastic floating between Hawaii and California; spread over 617,763 square miles in what is called the Great Pacific Garbage patch. Reason – the circulating ocean currents spread the plastic waste across millions of square kilometers and in all directions. According to the scientists affiliated with the Ocean Cleanup Foundation that develops advanced technologies to rid the world’s oceans of plastic, it is very challenging to clean such garbage patches using vessels and nets, and it would take thousands of years and cost billions of dollars to complete. However, to cut down the time and monetary investment to clean the Great Pacific Garbage Patch that contains about 80,000 tonnes (equivalent to 500 jumbo jets) of plastic waste, the 23-year-old Dutch student Boyan Slat who founded the Ocean Cleanup Foundation at the age of 18, has designed a machine that will use ocean currents as its driving force to catch the plastic.

Also Read: This Nature Photographer’s Seahorse Click Shows All That Is Going Wrong With Our Planet

The systems are estimated to remove half the Great Pacific Garbage Patch in the next five years, at a fraction of the cost. It will be the first ever attempt to tackle the patch since it was discovered back in 1997. The first cleanup system is set to be deployed by mid-2018.

In the past few months, the foundation has been busy welding together giant tubes that will sit on the surface of the sea and form the skeleton of the machine, creating the largest floating barrier ever made.

As the tow test of the 120-meter unit approaches, @boyanslat summarizes what is left to accomplish before we launch the first cleanup system into the Great Pacific Garbage Patch later this summer. pic.twitter.com/0tkmAubXKj

The cleanup system comprises long, durable and recyclable high density polyethylene tubes or floaters filled with air which will float on top of the ocean. The tubes will be suspended by a large sea anchor in a deep (600 metres), slow moving water layer, to slow down its movement to a degree that the plastic waste moves faster in the ocean currents than the cleanup system. This will then cause the plastic to accumulate against the cleanup system.

The 120-meter section of the @TheOceanCleanup system is almost ready for the Tow Test. Expect it to head out to the Pacific early next week. This means we're still on track to deploy the fully-assembled system this summer. pic.twitter.com/3B5rNelOgz

The forces acting on the plastic (waves, winds and currents) will also act on our cleanup systems. Our cleanup systems will therefore automatically gravitate to those areas where the highest concentration of plastic is. By acting like plastic, we can ensure the highest cleanup rate. Furthermore, our systems fully rely on the natural ocean currents and do not require an external energy source to catch and concentrate the plastic waste, highlighted one of the officials.

The tubes arranged in an open U-shape format will be held in place with cables to maximise their catching efficiency, and funnel the plastic waste (microplastics) into a central holding tank. Notably, the pipes are flexible enough to follow the waves and rigid enough to maintain its open U-shape.

In addition to this, impermeable nylon screens that marine life can’t get tangled in hang from the tubes to catch sub-surface (at a depth of around 3 metres) debris swept along by ocean currents. The marine animals can then safely pass underneath the screen with the current.

Also Read: With Messages, Pledges And Promises, Mother Earth Found Ample Support Among Netizens On The Occasion Of Earth Day

During our research, we found that most buoyant plastic mass is within the top few meters of the ocean. Scale model tests showed that our screen will be able to catch anything from one centimeter plastic particles up to large discarded fishing nets up to several meters in size, the official added.

Once the cleanup system gets full, the plastic will be extracted and loaded onto a support vessel, which will bring the plastic back to land for processing, recycling and resale.

Notably, the initial work on ocean plastic recycling showed that the material can be turned into high quality products. Imagine your next phone, chair, car bumper or sunglasses could be made from plastic retrieved from the Great Pacific Garbage Patch. By selling the branded material for reuse, the Ocean Foundation aims to eventually make the cleanup self-sustainable.

Boyan Slat has even asked for suggestions regarding what sort of products should be made out the plastic debris.

What products should we make out of the plastic we'll be collecting from the Great Pacific Garbage Patch? pic.twitter.com/8OxGsT6bKa

According to the Ocean Cleanup Foundation, the first collector will be around 120 metres (400 feet) in length. And if it works, it can be then extended to around 620 metres (2,000 feet), with a long-term plan to put around 60 collectors in the gyre, which is a large system of circular ocean currents formed by global wind patterns and forces created by Earth’s rotation.  The target is to remove half the Great Pacific Garbage Patch in the next five years.