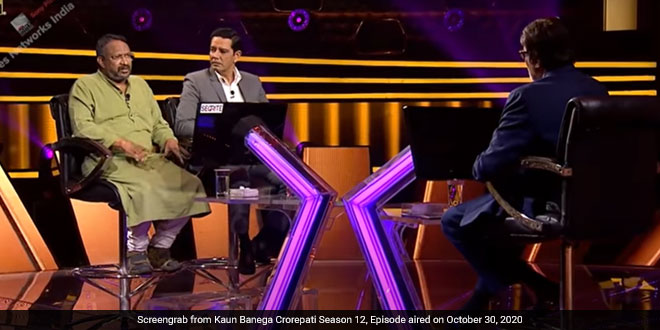 New Delhi: With an aim to raise awareness about manual scavenging which was banned by the government in 1993 but is still widely practised across the country, Amitabh Bachchan invited Ramon Magsaysay awardee, Bezwada Wilson, on Kaun Banega Crorepati 12’s Karamveer special episode that was aired on October 30. Because of this unlawful, unconstitutional and inhuman practice, at least 200 people die every year, said Mr. Wilson who was born in the family of manual scavengers and made it his life’s mission to eradicate the evil practice from the country. He has been fighting against manual scavenging for over 35 years.

Also Read: “Manual Scavenging Is An Unconstitutional And Illegal Act,” Says Amitabh Bachchan As He Pledges To Join ‘Any Campaign’ That Works For Welfare Of Manual Scavengers

54-year-old Mr. Wilson, who is convenor of Safai Karamchari Andolan (SKA), a movement that was started by him along with other activists in the early 1990s focusing on liberating manual scavengers and helping them move on to other professions, said on KBC,

Picking up dirt even for one day is very tough. Every year around 200 people die due to the illness while scavenging. Even children in my school used to say to me that you are a ‘bhangi’ and they don’t even know what the meaning of ‘bhangi’ is. No human being is happy to accept that they are untouchable. I have not chosen to be a ‘bhangi’ but ‘you’ (people of this nation) have made me a scavenger. Till date, I am not ready to accept that I am untouchable. I am just a citizen of this nation like everyone else, a human being.

Mr. Bachchan, who is also the Campaign Ambassador of NDTV-Dettol’s Banega Swasth India Campaign, urged the viewers to act towards halting manual scavenging forever. He asked Mr. Wilson why people involved in manual scavenging continue it, to which he said,

The biggest reason for people to continue working as manual scavengers is ‘caste’. They will not get any other employment. If we tell them that we belong to a lower caste, they would say that we won’t be getting that work. They send them away saying that they would call them if they want to get their manholes cleaned. Our society has made it like this. They have no other place to work. Even if they secure education and wish to do something else, they won’t be given an opportunity.

Mr. Bachchan asserted that the people involved in manual scavenging should be supported so that they can live a better life. While talking about the initiative Banega Swasth India, Mr. Bachchan said,

I am a part of ‘Swasth Bharat’ initiative. A lot of people participate. So I asked them if we can have an alternate solution to this. Then they told me about a factory in Aurangabad that manufactures a machine for cleaning the sewage. I immediately asked them where I can buy those machines. I purchased 50 machines and donated to the head of the organisation and told him to employ those machines. About a year later, I called to see how things were. I was told that they have sold the machines. They didn’t use those.

Mr. Wilson, in response, highlighted that at the individual level, some efforts may get failed but on a larger level, there are many sanitation workers who are waiting for machines. He added that technological development and support from the government and the society can help transform the state of the sanitation workers in the country.
Actor Anup Soni who joined Mr. Wilson as another guest on the ‘Hot Seat’, said on social media,

Mr. Bezwada Wilson has been fighting to eradicate the practice of manual scavenging from the society. It was an honour to be on Hot Seat with him in front of Mr. Amitabh Bachchan.

Mr. Bezwada Wilson has been fighting to eradicate the practice of manual scavenging from the society. Watch this special Epi of #KBC12 tonight at 9pm @SonyTV It was an honour to be on Hot Seat with @BezwadaWilson in front of Mr. @SrBachchan@001Danish @golu_a @SPNStudioNEXT pic.twitter.com/fMFhhIE2zH

Director Anubhav Sinha also took to his Twitter handle to share a picture of Wilson along with Anup Soni and Amitabh Bachchan on Friday. He wrote,

Mr Bezwada Wilson has worked against Manual Scavenging for decades. So good to see @SrBachchan honoring a man like that on KBC. There is still a lot of muck to be cleaned from people’s minds. Yo @soniiannup I look forward to the episode!!!

Mr Bezwada Wilson has worked against Manual Scavenging for decades. So good to see @SrBachchan honoring a man like that on KBC. There is still a lot of muck to be cleaned from people's minds.
Yo @soniiannup I look forward to the episode!!! pic.twitter.com/dKFrPBpUxV

The Evil Of Manual Scavenging In India

According to the Population Census 2011, manual scavenging, even after being banned, is the primary occupation of over 1.8 lakh Dalit families. As per the data collated by Safai Karamchari Andolan, about 1,760 people have died because of manual scavenging in the past 20 years. SKA’s estimates show that over 7.7 lakh workers have been sent into sewers since 1993 with complete knowledge and awareness of the dire consequences. There are nearly 26 lakh dry latrines across the country where humans are employed for cleaning excreta to earn their bread and butter.

The Central and the State governments have been taking steps to tackle the menace of manual scavenging including amending the Employment of Manual Scavengers and Construction of Dry Latrines (Prohibition) Act, 1993 and enforcing a new Act, Prohibition of Employment as Manual Scavengers and their Rehabilitation Act, 2013. The act provides for identification of the manual scavengers and rehabilitation them by providing skill training to them and enabling them to find alternative means of livelihood.

Halting Destruction Of Biodiversity Could Slow The Frequency Of Deadly Pandemics, Say Experts