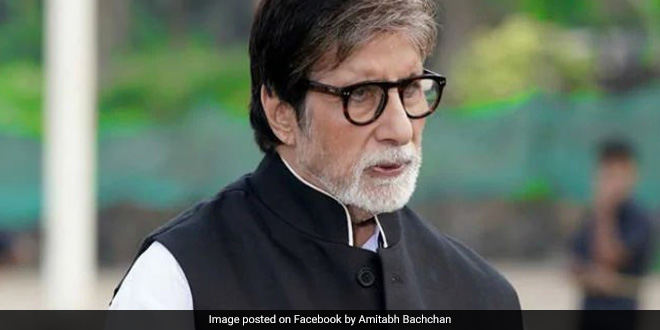 New Delhi: 78-year-old megastar Amitabh Bachchan today took to social media once again to talk about the plight of sanitation workers. Mr Bachchan termed manual scavenging as an “unconstitutional and illegal act” and said that he has pledged to join any campaign that works for the benefit of such workers. Big B who is one of the most active celebrities on Twitter took to the platform to share his thoughts on the act of manual scavenging, he said,

“Events of the day move you beyond words .. tonight is one such day .. manual scavenging is an unconstitutional and illegal act. Yet it exists and that work, suffer in human existence…Will join any campaign that works for their benefit, have pledged.”

T 3689 – .. events of the day move you beyond words .. tonight is one such day .. manual scavenging is an unconstitutional and illegal act .. yet .. it exists and they that work, suffer inhuman existence ..
Will join any campaign that works for their benefit .. have pledged !

Along with a tweet, Mr Bachchan also shared his thoughts on manual scavenging on his official blog post. He said,

There are times when the events of the day seem to last longer than what they were meant to be… the strength and the agony of them that live and serve in inhuman conditions and environs.. who get the discrimination of society, who labour in conditions that are humiliating yet for the presence and existence, they suffer?

In his blog, he also said that having a roof and feeding the family is sanitation workers prime objective. He added,

I am unable to contend with this and it shall end here. With the hope and prayer that the end for them that live in extraneous circumstances is of a brighter and existent life as humans..

Answering Mr Bachchan’s question on what is being done in-ground to change this scenario, Magsaysay awardee and Founder of Safai Karmachari Andolan, Bezwada Wilson added,

Individuals can make a little change but through policy intervention, we can expect some bigger changes, when it comes to manual scavenging. We need companies coming together to work on the issue of manual scavengers, we also need the government to come up with a separate policy for manual scavenging in India and ensuring it is not practised in any section of our societies.

Mr Wilson further said that this is also an issue of caste and patriarchy, as there are women in various states who go and carry human waste in their bare hands.

We need to design a word to describe them, without sounding menial. It’s like we no longer say physically handicapped, we call them ‘differently abled’, in Hindi they were addressed as ‘viklaang’, we now have a more dignified name for them ‘divyaang’. I would wish for a dignified name for manual scavengers as well.

Mr Bachchan also asked for suggestions from the public in his blog post previously. He had said, “I shall welcome any suggestions for them, which portray dignity and respectability.”