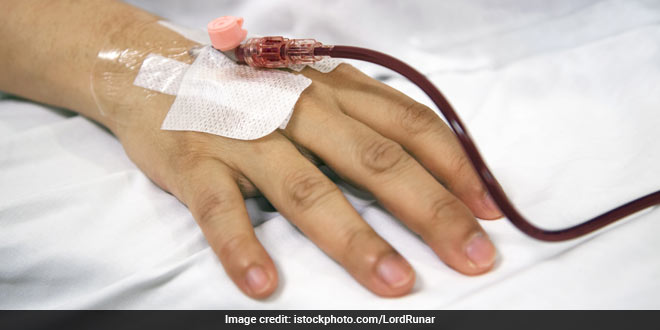 New Delhi: Prevention of Anaemia is one of the agenda of Government’s National Nutrition Week that is celebrated during the first week of September and is being extended this year to mark the entire month as ‘Poshan Maah’ or Nutrition Month. The reason being the direct link that nutrition or rather lack of it, which results in low Haemoglobin (Hb) among people, a condition which is called Anaemia. It decreases an individual’s capacity to work at an optimal level and inflicts children and adults alike.

Most of the people who have Anaemia have decreased capacity to work and often contribute less to the GDP (Gross Domestic Product) of the nation, suggests Dr Giridhara R Babu, Professor, Head Lifecourse Epidemiology, PHFI, Bangalore.

As per the National Family Health Survey (NFHS) 4, there has been a slight decline in Anaemia among pregnant women from 57.9 per cent in NFHS 3 (2005-06) to 50.4 per cent in NFHS 4 (2015-16). Despite this drop, Anaemia is still more prevalent among women (pregnant and non-pregnant) belonging to the age group of 15-49 years when compared to men of the same age group. While 53.1 per cent of women were found to be Anaemic in NFHS 4, in comparison 22.7 per cent of men were found to have Anaemia. Though Anaemia among children (6-59 months) has seen a drop from 69.4 per cent (NFHS 3) to 58.6 per cent (NFHS 4), there is still a long way to go when it comes to eradicating Anaemia from the country.

NDTV speaks to experts to understand the causes of Anaemia, why it is this prevalent in India and how can it be tackled. 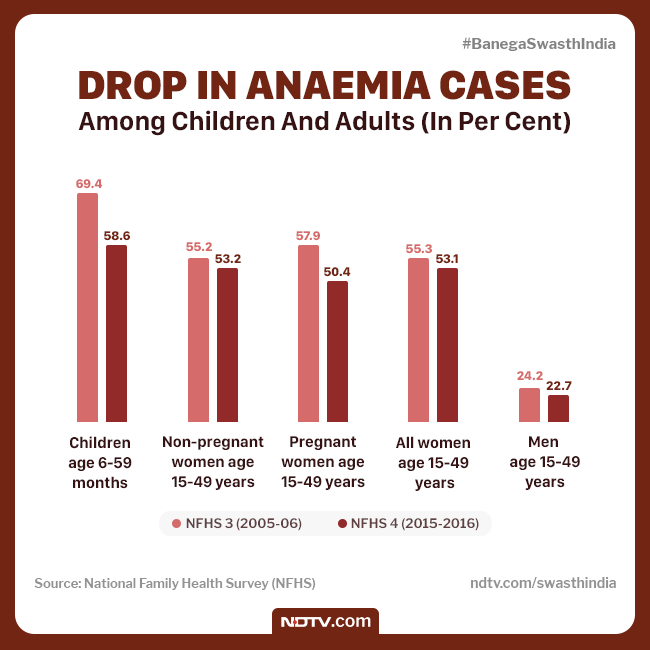 Human blood contains a red pigment called Haemoglobin (Hb) which carries oxygen to the different parts of the body. For the making of Hb, adequate amount of essential nutrients including iron, folic acid, vitamin C, protein and vitamin B12 are required. Deficiency of vital nutrients leads to decreased concentration of Hb which then leads to the decline in the oxygen supply to different parts of the body.

One can look at Anaemia as nutritional and non-nutritional. Nutritional Anaemia can be generally known as something related to what we eat. Lack of vital nutrients is the root cause of Anaemia, says Dr Giridhara.

Among all Anaemia , iron deficiency is the most common cause followed by vitamin B12 deficiency. Apart from this, insufficient vitamin A, folic acid, and diseases like jaundice can also lead to Anaemia.

As far as non-nutritional Anaemia is concerned, it can be attributed to lack of red blood cell (RBC) production in the body and loss of RBCs at a high rate. Poor diet, unusual hormonal levels and chronic diseases, immune disorders, infections among others are the common causes behind low RBCs.

Anaemia is sometimes a reflection of serious disorder in the body, to say, kidney or blood disorder, blood cancer, bone marrow failure in the form of aplastic Anaemia, says Dr Mitu. 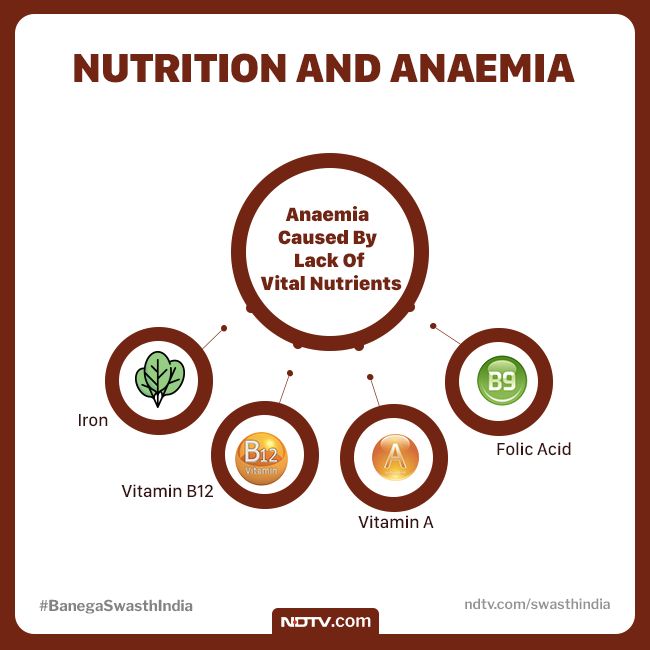 How is Anaemia diagnosed?

Among different age groups and gender, cut off point for Anaemia is different. For instance, among women ideally, Hb should be 12.1-15.1 gm/dl (grams per decilitre) and in men, it should be between 13.8 and 17.2 gm/dl. While in children it should be between 11 – 16 gm/dl, among pregnant women, it must be 11-15 gm/dl. Talking to NDTV about different Hb levels, Dr Mitu says,

I always tell my patients, we should keep standards for ourself. We need to stop believing that women will always be Anaemic or will have less Hb as compared to men. 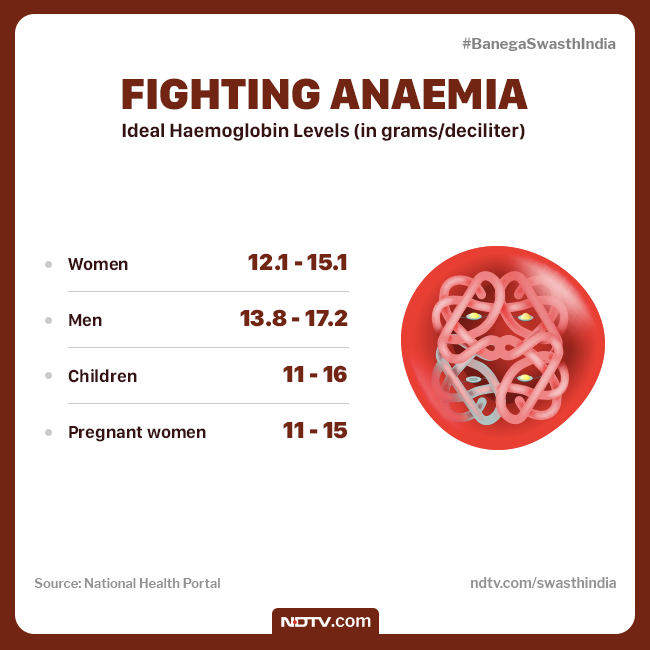 In order to measure the Hb level and cells that make up the blood: red blood cells, white blood cells and platelets, experts suggest a complete blood count (CBC). The Hb level clearly tells whether a person is Anaemic or not. But to understand the cause behind Anaemia peripheral smear – microscopic examination of the red blood cells, is suggested. Identification of the reason behind Anaemia will aid in the treatment process. For instance, if a person is Anaemic due to vitamin B12 deficiency, then he/she will have to inculcate sources of vitamin B12 in his/her diet.

People in India generally equate low Hb to iron deficiency. There is no doubt that iron deficiency is the common cause of Anaemia across the world, but it is not the only cause. We need to understand cell sizes and need complete report through peripheral smear, says Dr Mitu.

What are the symptoms of Anaemia?

I suggest keeping 12 gm/dl as a cut off for Anaemia. If somebody’s Hb is between 10 and 12 gm/dl, they generally don’t have grave symptoms of Anaemia. They may get tired if they do some physical exertion but mostly it is asymptomatic. Until and unless you do an investigation, you will never find it, says Dr Giridhara.

Hb between 8 and 10 gm/dl is considered as moderate Anaemia and is detectible either on an investigation or on reporting symptoms like fatigue and weakness to the doctor. Severe Anaemia corresponds to a level less than 8 gm/dl.

Symptoms of Anaemia usually depend on the severity of the degree of Anaemia. Normal levels of Hb is directly associated with the maximum efficiency of the body. Due to insufficient Hb in the body, all tissues don’t get enough oxygen which further leads to fatigue, inability to sleep, getting tired easily even after a regular walking or climbing a fleet of stairs, chest pain, muscular cramps, oral ulcer, hair fall, leg pain among other, says Dr Mitu.

Experts believe Anaemia can be acute to fatal. People with severe levels of Anaemia may face cardiac attack and can die due to complications. Pregnant women, if Anaemic, can witness impediments during delivery.

Why is Anaemia more pervasive among women?

There are multiple reasons behind women being more prone to Anaemia , namely, lack of proper nutrition, intergenerational that is transferred from one generation to another and blood loss during delivery and menstrual cycle. Elaborating on the same, Dr Giridhara says,

Set of cultural practices often undermines nutrition needs of women. Even today, in some parts of the country, women first cook and serve the entire family and eat towards the end. Healthy nutrients are first served to sons and head of the family.

In the case of intergenerational, if a woman is Anaemic and lives undernourished throughout her life, it is passed on to the baby. Further, when a baby has a lower nutrition status at birth, it becomes difficult to uplift the level of nutrition.

How can Anaemia be prevented? 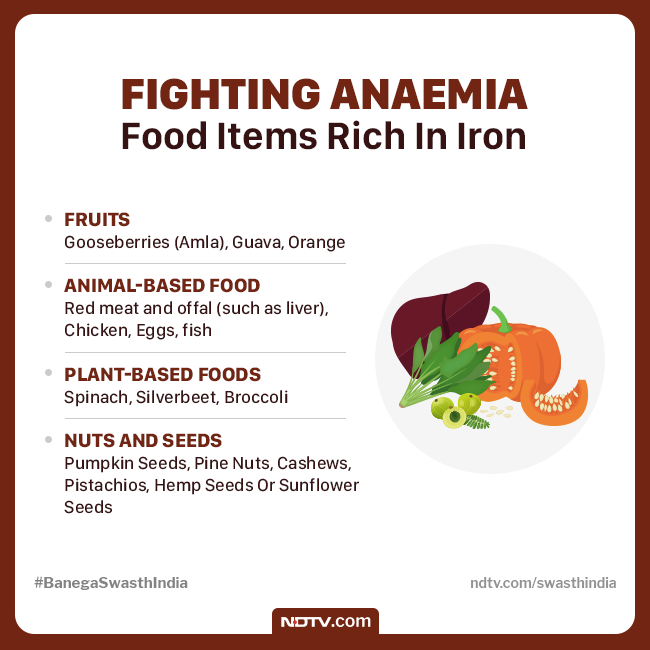 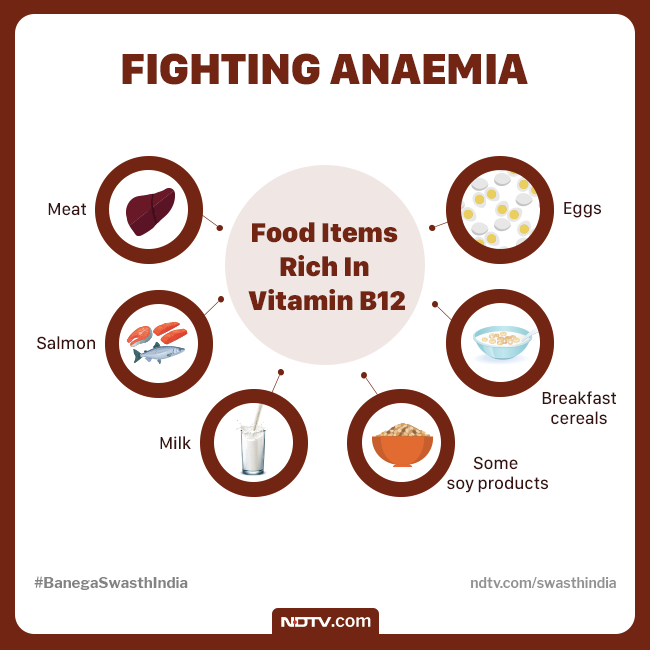 A plate of an Indian family has changed over the years. It is said that one should have five different colours on their plate, not in terms of spices, but fruits and vegetables. Today, we have palate friendly items on our plate as opposed to nutrients rich food, says Dr Giridhara.

Lack of iron and vitamin B12 in diet often makes it difficult for vegetarians and vegans to compensate for the heavy blood loss during periods and piles. “I don’t advocate that everyone should eat non-vegetarian food.

Of course, non-veg food is a good source of vitamin B12, but if you are a vegetarian, your diet should be supplemented with dairy products, fresh vegetables and salad, a good source of folate, suggests Dr Mitu.

Do supplements help in overcoming Anaemia?

Since iron and Vitamin B12 deficient Anaemia is predominant, Anaemic often consume iron and folic acid supplements, thinking it will increase their blood count, but truth be told, there is a lot more that we don’t know. For instance, what we eat versus how much of iron gets observed.

People are already talking about having iron circulatory overload which means there is more iron tablets than what we actually need and even then there is no correction of Anaemia ; Why? Because we don’t know if it is actually iron deficiency or vitamin or something else (causing Anaemia). We haven’t been able to investigate the source as usually we don’t get the peripheral smear test done, says Dr Giridhara.

Iron and folic acid supplements are beneficial only when a person is Anaemic due to iron deficiency. In the case of Anaemia due to vitamin B12 deficiency, blood loss or kidney disorder, supplements won’t help.

To avoid Anaemia, experts suggest the intake of a balanced diet since the conception of a child. What a mother eats during her pregnancy directly impact the growth and health of the new born. Post-birth also, one should pay attention to their diet and as and when Anaemia, low Hb levels are diagnosed, corrective measures should be taken because only a healthy human being can build a healthy nation.

Nutrition Week: Children Living In Village Near Jharkhand’s Jamshedpur Are Suffering From Malnutrition