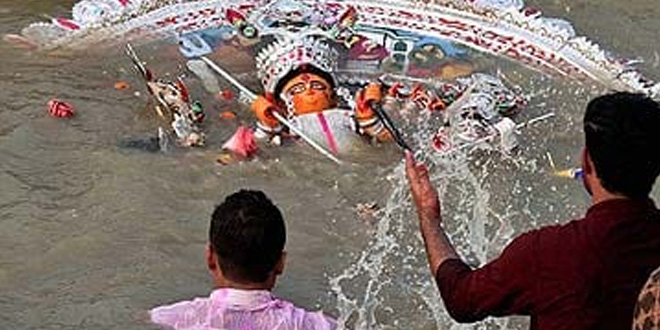 New Delhi: With the week-long carnival of Durga puja festivities coming to an end, environment activists Wednesday hailed the feat that no idol was immersed in the Yamuna river this year but flagged insufficient number of artificial ponds available for the ritual. The authorities had on Tuesday stationed multiple teams of Delhi police at each entrance to various Yamuna ghats and even at bridges across the river to ensure that no idols were immersed in the river.

The Delhi government had created 89 artificial ponds for idol immersion across the city to prevent the Yamuna from getting polluted. Yamuna activist Manoj Misra welcomed the step saying this will set precedence for other cities and ensure the water bodies are not abused in a reckless manner. Mr. Mishra tol PTI,

It is a welcome step. This step was largely based on successful experiment in Surat. It is not necessary that idol immersion takes place in rivers only. It can be safely done in other places like artificial ponds.

Environment activist Vikrant Kumar Tongad, however, said the number of artificial ponds created by the authorities for the immersion was not sufficient. He said there was lack of public awareness and people were not educated properly about the pits created by the agencies. Mr. Tongad said,

People were told about the pits at the last moment. There was no facility in villages like Fatehpur Beri and other interior areas. They had to immerse idols in local ponds which are already polluted.

He further said that although fewer idols were immersed in Yamuna and Hindon rivers compared to previous years, it cannot be said that no idols were immersed at all. Another activist Diwan Singh, who has been working for revival of water bodies in the national capital, said it is a sign of a good progression. Mr. Singh said,

This has stopped something intoxicating from going into the river. However, idols are only an iota of total pollution in the rivers. Focusing on idols and leaving others pollutants is tantamount to fooling people. The number of artificial ponds created by the Delhi government is a good number to start with.

A National Green Tribunal (NGT) appointed monitoring committee had in January directed authorities in the National Capital Region to explore the possibility of creating artificial ponds and pits in various localities to prevent pollution in the Yamuna. The tribunal in 2015 had prohibited the immersion of idols and said immersion should be allowed only of the ones which are made from biodegradable material and not plastic/Plaster of Paris. Only those colours should be used on the idols which are environment-friendly, the NGT had said.