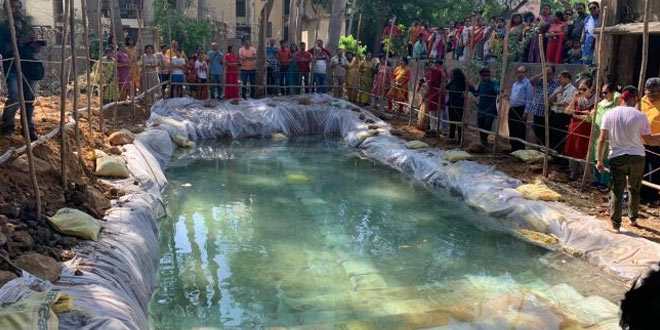 New Delhi: The move by authorities to not allow immersion of idols in rivers after Durga Puja has drawn mixed reaction from organisers in the city, with some welcoming it as a “good beginning” for sustainable environment while others alleged the step has “upset the cycle” of festive rituals. Seeking to check pollution of the Yamuna river, arrangements of artificial ponds were made for immersion of idols of Goddess Durga on Dusshera on Tuesday (October8).

It is a very good beginning for a sustainable environment and a cleaner Yamuna river. It is the first time so there is a lot of scope for improvement but is good for a larger cause, said Avik Mitra, member of the organising committee of Mela Ground Durga Puja Samiti in south Delhi’s CR Park.

Mela Ground Durga Puja Samiti is into its 45th year and its pandal attracts huge crowds every puja.

We are the big pandal organisers and if we take the right step of being supportive of the government’s move for a sustainable environment, organisers of small pandals will also follow. We must lead the way, he said.

Ankur Bhattacharya of Dakshinanyan Durga Puja Organising Team in Dwarka also echoed Mr Mitra’s sentiments and supported the government’s move to not allow immersion in Yamuna. “It is a good culmination…And, new things take time to adjust but it is for good of the environment only which we also treat as Mother Nature and Yamuna whom we call as Yamuna Ma too,” he said. About 90 artificial ponds were dug up for the immersion, according to government officials. However, Swapan Ganguly of New Delhi Kalibari and octogenarian Anand Mukherjee, chairman of South Delhi Durga Immersion Committee alleged the move has “disrupted the cycle of rituals of Durga Puja”.

It has hurt the religious sentiments of many people from our community. We should have been consulted. (Durga) Ma is welcomed with much fanfare and she is bid adieu in an equally majestic way. Immersing her in such ponds is diminishing her glory, Mr Ganguly claimed.

He also claimed that the ponds dug out by Delhi government authorities were “small and inadequate”. “We make big idols and there she is to dipped in a dug-out pond. The size was not sufficient given there were so many other idols in the queue,” he alleged.

“We did not immerse our idol rather we brought the water from Ganga river from Haridwar and sprinkle it on the idol and just left there,” Swapan Ganguly claimed. Mr Mukherjee, 81, also said the immersion committee he heads should have been consulted.

We had suggested that instead of having scattered ponds, we can have few big facilities including. A huge immersion facility can be arranged near khadar area of Yamuna and water can be brought there through pumps, he said.

The South Delhi Durga Immersion Committee is the apex committee of all puja committees in south Delhi. Mr Bhattacharya said those who are claiming it that ritual cycle has been upset should know that “Ma is returning to earth from earth through the element of water”.

Mr Mitra said, Yes, many people criticise when we decided to go for eco-friendly and support this move, mostly the older generation. Even on social media the move attracted criticism, but it is fine, good things face resistance in the beginning. He said many are claiming that it is a disrespect to Durga Ma to not immerse in the river but is it not a disrespect to Yamuna whom we also call a mother.

The Centre had recently issued a 15-point directive to states, asking them to make elaborate arrangements to check pollution in the Ganga river and its tributaries during the festive season, including immersion of idols which could attract a fine of Rs 50,000. A directive dated September 16, issued by Rajiv Ranjan Mishra, Director General of National Mission for Clean Ganga, said no idol immersion should be allowed in the Ganga river and its tributaries. It had also asked state government officials to submit an action-take report within seven days after the end of festivals like Ganesh Chaturthi, Vishwakarma Puja, Dussehra, Deepawali, Chath Puja and Saraswati Puja.