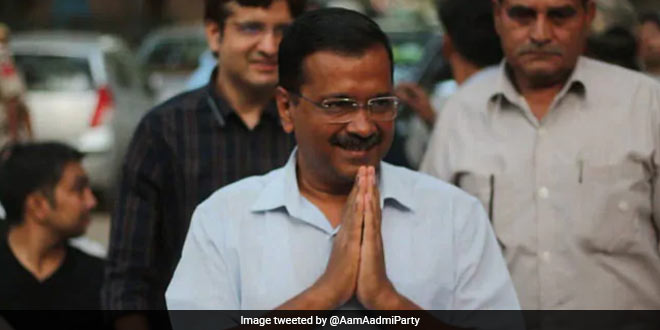 New Delhi: Delhi Chief Minister Arvind Kejriwal today congratulated the residents for supporting the government over its move to prohibit immersion of Durga idols in the Yamuna in the national capital on Tuesday. Mr Kejriwal also praised government officials for the smooth conduct of the event.

Proud of our Delhi. Congratulations to all Delhi government officials who ensured that the new eco-friendly arrangements did not inconvenience anyone, Mr Kejriwal tweeted this morning.

According to a report, this is probably the first time in over 100 years that no idol was immersed in Yamuna since Durga puja celebrations began in Delhi. Listing the various measures taken by his government, Mr Kejriwal said that artificial ponds were created on a large scale for the immersion of idols.

I was closely monitoring the arrangements for Durga idol immersions through my officers and MLAs yesterday. This was the first time Delhi government had created artificial ponds on such a large scale. I am glad this year Yamuna was not polluted & devotees of Maa Durga were not inconvenienced, he tweeted.

Police teams were posted at entrance to various riverside ghats to ensure that the idols are not immersed in the river.

Also Read: Say No To Plastic: Bangla Sahib Gurudwara Bans Use Of All Types Of Plastic Items

Durga Puja organisers across Delhi also were largely reported to have celebrated the festival in an eco-friendly manner using bamboo, wood, clay, and paper to celebrate the festival. Not just the pandals, the decoration and the cutlery used to serve “prasad” were bio-degradable. Even the idols were made up of eco-friendly materials soluble in some pandals.

From idols to decoration, everything is created using soluble clay. We have used organic colours made of dried fruits and flowers and we are also using paper plates to distribute bhog, said a member of the puja organising committee in Chittaranjan Park, known as Delhi’s mini-Kolkata.

At another pandal in the area, the Durga idol was decorated in the traditional “daaker saaj” as against the silver foils.

Durga Puja organisers in Safdarjung Enclave used betel leaf plates and glasses made of paper at their pandals.

Whatever flowers we are using, we are making sure that they are disposed of properly using dustbins, said the event organiser.

With inputs from agencies