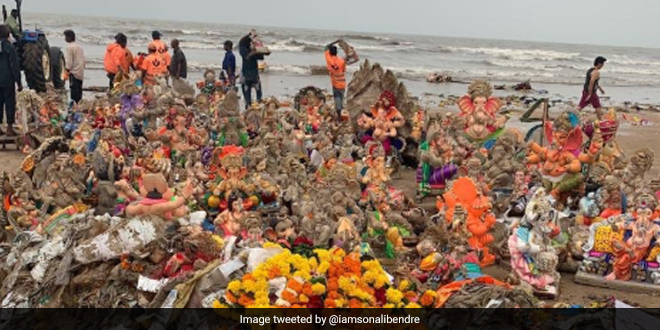 New Delhi: Horror of waste unfolded like every year on the beaches of Mumbai. Despite several celebrities urging their fans and followers to opt for eco-friendly Lord Ganesha idols during Ganesh Chaturthi but no avail, the idol immersion this week was nothing short of heart-breaking. Actress Sonali Bendre Behl was the first one to express her concern about pollution caused by the Ganapati visarjan.

The actor took to Twitter to share a photo of Ganesh idols, water bottles and other plastic waste at the Juhu Beach in Mumbai, Ms. Bendre wrote along with the picture,

After yesterday’s visarjan… If these are no signs of damage we are causing then I don’t know what are! This cannot happen we need to do better.

After yesterday’s visarjan… If these are not signs of damage we are causing then I don’t know what are! This cannot happen we need to do better! pic.twitter.com/0YYJGNfUby

Actor Ritish Deshmukh too shared a few images of Lord Ganesha idols immersed in water with the caption ‘stop’ written on them. Mr. Deshmukh wrote on the microblogging site,

Is this a good bye our most loved Bappa deserves? Let’s #Stop disrespecting our God & our Planet – let’s work towards -a sustainable eco-friendly Ganesh Festival.

Is this a good bye our most loved Bappa deserves? Let’s #Stop✋???? disrespecting our God & our Planet – let’s work towards -a sustainable eco friendly Ganesh Festival. #PlanetFirst @curry_nation @pritijnair pic.twitter.com/PJJTmMViIH

I made the Ganesha idol at home out of Mud-clay. I want to be responsible towards my environment, hope we can leave a better-cleaner planet for our children. They learn from what they see. Wishing you all happiness & prosperity.

I made the Ganesha idol at home out of Mud-clay. I want to be responsible towards my environment,hope we can leave a better-cleaner planet for our children. They learn from what they see. wishing you all happiness & prosperity #HappyGaneshChaturthi #ecofriendly #GanpatiBappaMorya pic.twitter.com/qhWBsXdvw1

NDTV reached out the activist and Beach warrior, Chinu Kawatra for his opinion on the on-ground reality of the Visarjan in the city. He shared,

We have been involved with beach clean-up for two plus years now, and interestingly we started during Ganesh Chaturthi – due to the after math of visarjan, and we continued it and it’s been 107 weeks now. I can definitely say that Mumbai is changing because the number of idols being immersed in the sea as compared to the massive number of idols we used to see when we started in the initial days, has drastically reduced this year. Statistically speaking, if there were 200 plus idols for immersion on Dadar beach alone last year on the first immersion day and this year the number has reduced to 20. So there is a sense of consciousness among people now and they are pushing for eco-friendly idols and artificial ponds.

Chinu further shared that even though numbers are less, he feels there is still scope for it to reduce further considering the awareness around environmental crisis today.

Considering the awareness around environmental awareness and ocean pollution today, I feel this number should have been reduced to zero. People have opted for innovative and eco-friendly Ganesha idols this year, made of mud and paper, among others and we need to ensure everyone realises the importance of eco-friendly Ganesh Chaturthi by next year, he signed off.

“Single-Use Plastic To Be Banned In A Phased Manner”: Ram Vilas Paswan