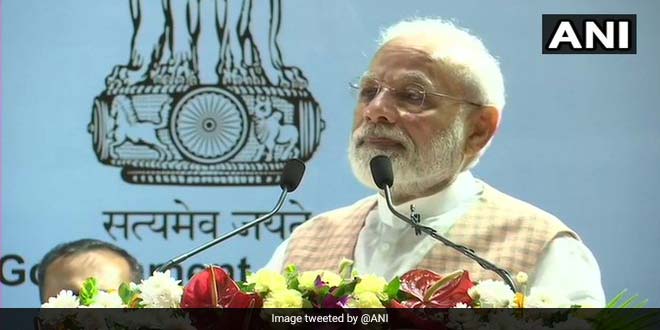 New Delhi: “During the immersion of elephant headed Lord Ganesha, a lot of plastic and other kinds of waste goes into the sea. This time, let’s try that the materials that add to the water pollution are not submerged in water”, said Prime Minister Narendra Modi on Saturday (September 7), after laying the foundation stone for metro projects in Mumbai. During his address, Prime Minister stressed on plastic pollution and water pollution caused during Ganesh Visarjan, that marks the culmination of 11 day festival called Ganesh Chaturthi.

Ganesh Chaturthi, celebrated with great fervor across India, especially Maharashtra, marks the homecoming of Lord Ganesha. During the 11 days, people install beautifully decorated Ganesha idols at their homes or in pandals for the communities to get together and celebrate. Post celebration, these idols are immersed in the nearby water body. Traditionally, these idols are made of PoP (Plaster of Paris) and take several years to fully dissolve in water, thereby polluting rivers of India. Also, PoP based idols reduce oxygen levels in the water, taking away aquatic life.

To avoid the humongous amount of waste generated post Ganesh Visarjan (immersion) and water pollution, many devotees, have started to celebrate the festival in an eco-friendly manner. For instance, actor Riteish Deshmukh made a Ganesh idol from mud clay and shared the tutorial with his followers as well. Sharing the DIY video, he said, “I made the Ganesha idol at home out of Mud-clay. I want to be responsible towards my environment, hope we can leave a better-cleaner planet for our children. They learn from what they see. Wishing you all happiness & prosperity.”

I made the Ganesha idol at home out of Mud-clay. I want to be responsible towards my environment,hope we can leave a better-cleaner planet for our children. They learn from what they see. wishing you all happiness & prosperity #HappyGaneshChaturthi #ecofriendly #GanpatiBappaMorya pic.twitter.com/qhWBsXdvw1

Actor Dia Mirza also promoted the concept of eco-friendly way of celebrating the festival of Ganesh Chaturthi. She also highlighted the fact that how in the past, people would make Ganesh idols from clay but over the years it was replaced with PoP, and plastic and toxic paints tagged along.

Prime Minister Narendra Modi had stressed upon giving up single-use plastic while addressing the nation on 73rd Independence Day as well. He said,

During my 2014 speech, I spoke about cleanliness. It became a movement in the country and the common man took it up with gusto. Today, I have another request. By October 2, on the birth anniversary of Dear Bapu (Mahatma Gandhi), I want to urge the citizen to give up single-use plastic.

Later in the recent edition of Mann Ki Baat, a monthly radio programme, Prime Minister reiterated the appeal for a plastic-free India and said,

This year, on October 2, when we celebrate Bapu’s 150th birth anniversary, we shall not only dedicate to him an India that is open defecation-free but also lay the foundation of a new revolution against plastic, by people themselves, throughout the country.

During his address in Mumbai, PM urged Mumbaikars to make the Mithi River and other water bodies free of plastic.

Fight Against Plastic: Vegetable Vendors In Agartala Join Hands Against Use Of Plastic Bags