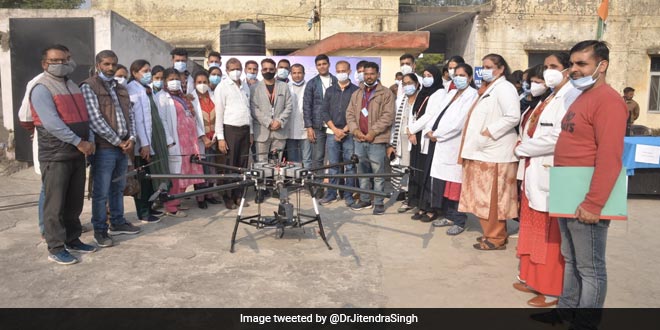 Our drone will drop 'sanjeevani booti' for the protection of humanity and human lives and maintain peace, said Union Minister for Science and Technology Jitendra Singh

Jammu: Union Minister for Science and Technology Jitendra Singh on Saturday (November 27) launched the first-of-its-kind drone driven aerial delivery facility to transport COVID vaccines as well as emergency medicines to inaccessible and difficult areas in a short span of time. Speaking on the occasion, he said while Pakistan drone carries explosives to spread terror and threaten human lives, the Indian drone has assumed the role of a COVID warrior to carry life-saving vaccine and life-saving medicines for safety and well-being of mankind. This indeed is the fundamental difference between the two countries, he said.

Also Read: From Creating Role Models To Vaccinating At Home, Here’s How J&K’s Bandipora District Has Rolled Out COVID Vaccination

The first consignment of 50 vials of COVID vaccine which was dropped by the drone near the International Border (IB) in Marh area. The “Octacopter” drone was developed indigenously at Bengaluru at the initiative of Council of Scientific and Industrial Research (CSIR). The Minister said that the Octacopter has compliance to DGCA-NPNT, Geo fencing and digital sky with 360 degree Collision avoidance making it one of the best UAV of its class. He also added that the Octacopter developed by National Aerospace Laboratory, Bengaluru, can be used for a variety of BVLOS (Beyond Visual Line of Sight) applications for last mile delivery of medicines, vaccines, food, postal packets, Human organs etc. Later speaking to ANI, Jitendra Singh said after achieving the landmark of 100 crore vaccination, PM Modi set another target, “Har Ghar Dastak”.

Taking inspiration from that, a drone was developed in India. The indigenously developed drone will also be called COVID warrior. It can be used at low cost in especially mountain states like Jammu and Kashmir, Himachal Pradesh, Uttarakhand, Arunachal Pradesh where it is not possible in every situation to deliver vaccines.

The minister also said drone will drop “sanjeevani booti” for the protection of humanity and human lives.

It has been launched at such a place which is located on the border. This is such a place where a lot of drones were sent from the Pakistani side for a long time. The incoming drone from Pakistan drops explosives for the destruction of humanity, disrupt peace, to promote terrorism. Our drone will drop ‘sanjeevani booti’ for the protection of humanity and human lives and maintain peace, he said.

Related Topics:
Coronavirus Health Jammu and Kashmir
Up Next