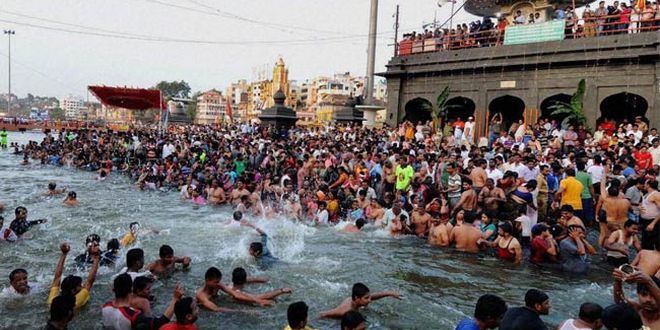 New Delhi: Ahead of the 2019 Mahakumbh, where the Uttar Pradesh government is expecting around 12 crore pilgrims, the Centre has asked the state government to expedite the process of cleaning all 35 drains in Allahabad that meet river Ganga well before the religious congregation begins on January 15, 2019 and ends on March 4, 2019. To make Kumbh Mela, recognised by UNESCO as an “intangible cultural heritage of humanity”, a success, the progress of about 30 projects being undertaken in Uttar Pradesh under the Namami Gange programme were reviewed by Rajiv Ranjan Mishra, Director General, National Mission for Clean Ganga (NMCG).

Also Read: Perception That ‘Nothing Significant’ Being Done To Clean Ganga Is Not Correct, 80% Ganga To Be Clean By March 2019, Says Nitin Gadkari

While reviewing all 30 sewerage projects, NMCG urged the state government to complete eight of the 10 ongoing projects by December and start work on the remaining sanctioned projects at the earliest. The Director General of NMCG also requested the state’s chief secretary for active involvement of 26 district Ganga committees to be constituted for rejuvenation of the river. In addition to this, the Uttar Pradesh administration was also asked to complete the repair, rehabilitation and construction work of 87 ghats along the Ganga River.

To clean all the 35 drains in Allahabad that meet the river Ganga, the NMCG suggested the state government officials to use bioremediation technique so that projects could be completed on time. Under the bioremediation technique, the ‘sewage-eating microbes’ consume or break down environmental pollutants such as oil and organic matter. In simple terms, bioremediation is a system of sewage treatment where microbes are used to degrade flowing sewage into carbon dioxide and water. In this case, the bacteria play a vital role in treatment of sewage without causing any release of foul odour, thus reducing stench from raw sewage.

The NMCG also urged the state government to focus on tributaries of Ganga and send proposals for Meerut, Moradabad, Saharanpur, Lucknow and Jaunpur so that work on cleaning of tributaries such as Hindon, Ram Ganga, Kali and Gomti may begin at the earliest.

While raising the issue of solid waste going into Ganga through the drains, the NMCG requested the UP government to direct the urban local bodies along river Ganga to prepare an action plan to provide adequate arrangements in the drains, stretching at least a kilometre from the river’s confluence, to tap the solid waste from entering into the river.