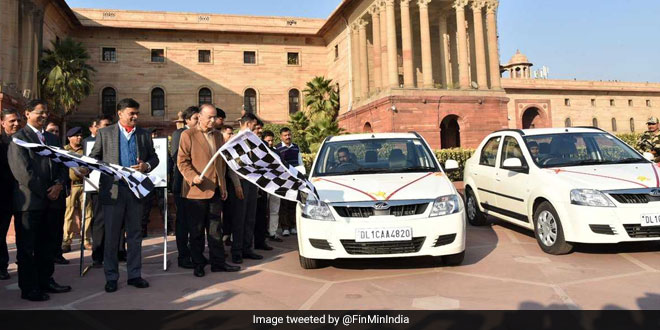 New Delhi: In a move aimed at reducing air pollution and carbon emissions, Finance Minister Arun Jaitley on Wednesday launched the induction of 15 electric vehicles in the Ministry which is likely to save 36,000 litres of fuel each year. The Finance Ministry’s initiative, which follows e-mobility efforts by other Central and state government departments, is part of an ambition to replace the government’s 5,00,000 conventional internal combustion engine cars with electric variants. A Finance Ministry official said,

The 15 electric vehicles, Mahindra e-Verito, has been taken on lease at Rs 40,000 per month per car for joint secretaries and senior officials of the Department of Economic Affairs (DEA). It will save 36,000 litres of fuel each year.

Further, four fast charging points (DC chargers) and 24 slow charging points (AC chargers) have been installed at the North Block for charging these vehicles. While the DC charger takes 90 minutes, AC charger takes 6 hours to fully charge the car battery. The DEA has signed an agreement with Energy Efficiency Services Ltd (EESL), a joint venture of public sector units under the Ministry of Power, for deployment of the 15 electric vehicles. Other departments in the Ministry are likely to adopt e-mobility soon.

Also Read:  Delhi Launches Trials Of Third Electric Bus As It Promotes Use Of Electric Vehicles To Combat Air Pollution

Finance Ministry said in a statement,

With the induction of these 15 vehicles being provided on lease basis for a period of 5 years, DEA is expected to save over 36,000 litres of fuel every year besides leading to reduction of over 440 tonnes of CO2 (Carbon Dioxide) annually.

The country spends Rs 7 lakh crore on importing crude oil each year. Apart from contributing to high pollution, it is a big problem for the local economy. E-mobility will reduce greenhouse gas emissions from the transport sector and reduce pollution level in cities. The Ministry said,

With this development, the DEA begins its transition towards a reduced carbon footprint and a more environmentally sustainable future. It marks its participation in India’s e-mobility goal of 30 per cent fleet electrification by 2030.

With this development, the DEA marks its participation in India’s e-mobility goal of 30 per cent fleet electrification by 2030. It has also issued an office memorandum for all the government offices in Delhi to switch over to electric vehicles (EVs). Asserting e-mobility as a sustainable solution to mitigate climate change and threat to public health caused by vehicular emission, Mr. Jaitley said that EVs have the potential to boost India’s growth by enhancing manufacturing, job creation and technical capabilities.

Power Minister R.K. Singh, who jointly flagged off the EVs, said that the government is promoting e-mobility by taking a lead in changing its fleet of cars with electric cars and at the same time creating the Right Policy Framework enabling this ecosystem. The maintenance and operating costs of these vehicles, which are automatic and fully air-conditioned with zero emission, is almost one fourth in comparison to an internal combustion engine. The only limitation is it can run 120 kms in one full charge.

Air Pollution: 73 Per Cent Of Delhi Residents ‘Not Satisfied’ With Air Quality, Says A Study