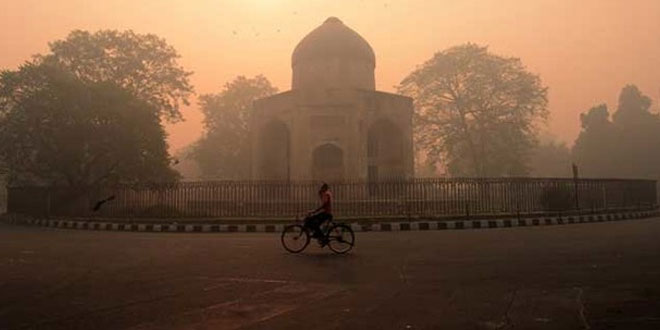 New Delhi: Delhi’s air quality was recorded in the “very poor” category on Monday as the impact of rain began to subside and the pollution level started rising, authorities said. According to the Central Pollution Control Board (CPCB) data, the overall Air Quality Index (AQI) in the city reached 337, which is in the ‘very poor’ category. Thirty areas in Delhi recorded “very poor” air quality, while two areas witnessed “poor” quality air, it said.

In the NCR, Ghaziabad, Faridabad, Gurgaon (Gurugram) and Noida recorded “very poor” air quality, the CPCB said. Delhi’s pollution level went down on Sunday after rainfall washed away pollutants and cleansed the air on Saturday, authorities said. The air quality in the national capital has been oscillating between the upper range of the “very poor” and the ‘severe’ category for the past two weeks.

Saturday’s rainfall, along with a sufficient wind speed, was enough to wash away air pollutants to an extent and improve the AQI. The air quality is likely to improve further, much faster during the day, as a moderate surface wind speed is positively working to disperse pollutants, which is the key factor now to keep pollution in check under cool and foggy weather conditions.

However, it also noted that the respite was not expected to last for more than two days as the relative humidity was very high and temperatures were likely to drop further, which would force the boundary layer to come down and hold the pollutants near the surface. It said the AQI will start increasing gradually from Tuesday.

Green Tribunal Concerned Over Lack Of Policy On Disposal Of Solar Panels Coated With Antimony, A Toxic Chemical

Save The Planet And Give Up The Use Of Glitter, Actor Dia Mirza Urges Netizens