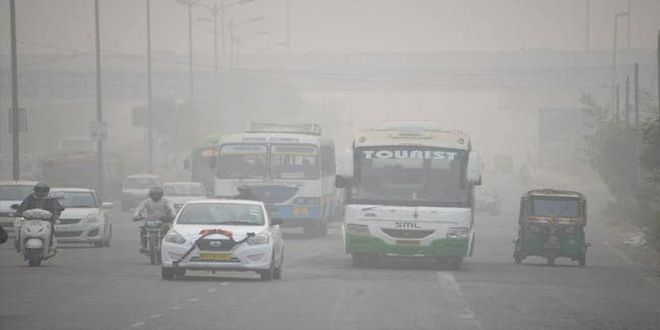 Illegal encroachment further adds to traffic woes in the capital. Guards need to be posted to ensure smooth passage of traffic.

Mr. Lal also ordered police to ensure traffic regulations are followed strictly, especially in Soan Park in Mundaka where he said no traffic regulations are followed. He expressed concern over garbage burning in Bawana, Mundaka and Narela which worsens the air quality. He lashed out at the DSIDC Limited for not monitoring the day-to-day status of garbage accumulation. The EPCA Chairperson also came down heavily on civic body officials over not lifting garbage regularly in Nangloi.

Since Wednesday the air quality was in the severe category before slightly improving on Friday morning to very poor. In view of the prevalence of severe air quality for over 31 hours, the EPCA on Thursday imposed the 24-hour ban on the entry of trucks.

Entry of trucks to Delhi would be stopped for 24 hours starting 11 pm Friday in view of the severe pollution in the national capital, the Supreme Court-appointed EPCA has instructed authorities. In a letter to chief secretaries of Delhi, Uttar Pradesh and Haryana, Lal directed them to stop the entry of truck traffic into Delhi, except essential commodities, from 11 pm on January 4 to 11 pm of January 5.

“The enforcement of this direction requires coordination of all NCR (National Capital Region) states and you are therefore, requested to take steps to ensure that this happens. Also, the opening of the Eastern and Western Expressway will make this easier to implement as the trucks that are not destined for Delhi now have a convenient alternative to take,” Mr. Lal said.

Mr. Lal also urged people to minimise the use of personal vehicles and avoid being outside for prolonged periods. The direction came after the recommendations of the Central Pollution Control Board-led task force.

Find The Nearest Toilet: More Than 33,000 Public Toilets Across 835 Cities Have Been Mapped On Google Maps