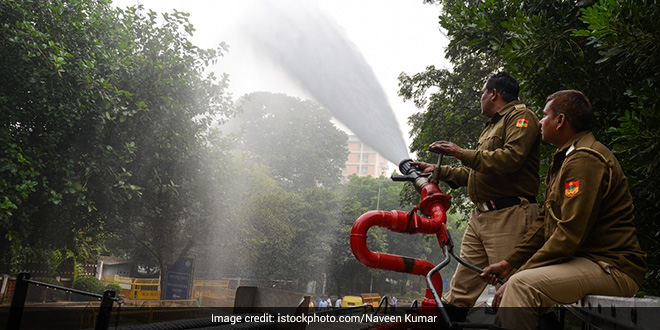 The GRAP for the National Capital Region has been classified under four different stages of adverse air quality in Delhi - poor, very poor, severe, severe plus

New Delhi: With meteorological conditions set to turn unfavourable following the withdrawal of monsoon and burning of stubble by farmers in Punjab, Delhi is gearing up to implement the revamped Graded Response Action Plan — a set of anti-air pollution measures followed according to the severity of the situation — from October 1. According to directions of the Commission for Air Quality Management (CAQM), the plan will come into force 15 days before the usual date to prevent the build up of pollutants after the change in wind direction to northwest and a drop in the wind speed following the monsoon withdrawal, an official said.

We will be also making use of the real-time source apportionment system which will help understand the real-time effect of pollution sources like vehicles, road dust, construction dust, biomass burning, farm fires, and industrial emissions.

The green war room will monitor violations and redress complaints and grievances in keeping with the practice being followed for the last two years.

A decision is yet to be taken on the re-implementation of the “Red Light On Gaadi Off” campaign, the official said. Under the campaign first launched on October 16, 2020, to cut down vehicular pollution in the capital, drivers are encouraged to switch off their vehicles while waiting for the traffic light to turn green.

The official said the “complete ban” on firecrackers will also cover Dussehra festivities. The revised GRAP, which is part of a new policy formulated by the CAQM to abate air pollution in Delhi-NCR, focuses on proactive implementation of the curbs based on forecasts — restrictions can be imposed up to three days in advance.

Earlier, the authorities would implement the measures only after the PM2.5 and PM10 concentration touched a particular threshold. The new plan also entails a ban on BS IV four-wheeler diesel vehicles, barring those engaged in essential services, in Delhi and the bordering districts of NCR if the air quality index (AQI) breaches the 450-mark. The Graded Response Action Plan (GRAP), notified by the Ministry of Environment and Forests in 2017, would come into force from October 15 when air pollution levels in the region start worsening.

The CAQM has now decided to implement it from October 1, according to a communication sent to state agencies and departments concerned.

The revised GRAP recommends a ban on the use of coal and firewood, including in tandoors in hotels, restaurants, open eateries; and on diesel generator sets, except for emergent and essential services under Stage I. If the situation turns “severe” (Stage III), authorities will have to enforce a ban on construction and demolition activities in NCR, except on essential projects (like railways, metros, airports, ISBTs, national security/defence-related projects of national importance) and non-polluting activities such as plumbing, carpentry, interior decoration and electrical works.

Brick kilns, hot mix plants and stone crushers not operating on clean fuels, and mining and associated activities in NCR will also be banned under Stage III.

The measures to be followed in the “Severe Plus” category or Stage IV include a ban on the entry of trucks into Delhi, and on the plying of Delhi-registered diesel-run medium goods vehicles and heavy goods vehicles (HGVs) in the national capital except those carrying essential commodities.

The use of four-wheeler diesel light motor vehicles, except for BS-VI vehicles and vehicles engaged in essential services, will also be banned in Delhi and the bordering districts of NCR.

Stage IV will also entail a ban on industries running on dirty fuels and on construction and demolition activities in linear public projects such as highways, roads, flyovers, over bridges, power transmission and pipelines.

State governments can consider allowing 50 per cent staff to work from home in public, municipal and private offices, and additional emergency measures like closure of educational institutions and the plying of vehicles on odd-even basis etc, it said.

Actions under Stages II, III and IV will have to be taken at least three days in advance of the air quality index (AQI) reaching to the projected levels of that stage.

Earlier, authorities would wait until PM 2.5 or PM 10 concentration touched a particular threshold.

Under the ‘severe plus’ category, agencies waited for PM 2.5 and PM 10 concentrations to stay above 300 and 500 micrograms per cubic metre for 48 hours or more before implementing the measures mandated under GRAP. The sub-committee on GRAP will meet frequently to plan for advance action and issue necessary orders for invoking various provisions of GRAP, based on the prevalent air quality and the AQI forecast to be provided by the India Meteorology Department (IMD) from time to time.