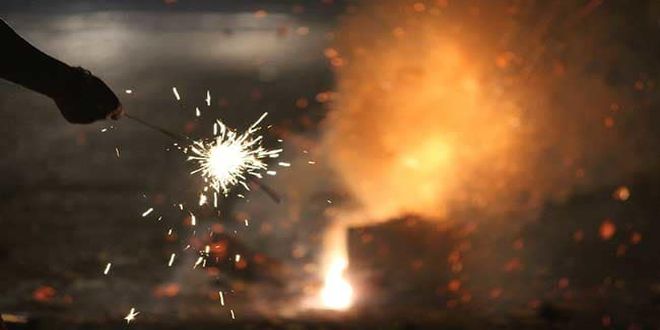 New Delhi: Petroleum and Explosives Safety Organisation (PESO) told the Supreme Court on Tuesday (March 5) that it has finalised “improved formulations” for making green firecrackers and product approvals will be given to manufacturers by March 21. The apex court was informed that joint work was undertaken by Council of Scientific and Industrial Research (CSIR), National Environmental Engineering Research Institute (NEERI), and other fireworks manufacturers related to formulation and production of green firecrackers. The trial of some samples was also conducted, PESO said, adding that the development would reduce the emission of pollutants PM 2.5 at least by 25-30 per cent.

It further said that it has been envisaged that bulk production of fireworks having improved formulations shall be initiated by March 30. “It is envisaged that bulk production of fireworks (new formulations) shall be initiated by May 10, 2019,” it said. Advocate Gopal Shankaranarayanan, appearing for the petitioner who has raised the issue of air and noise pollution from firecrackers, told the top court that as per minutes of the meeting, Barium Nitrate and Potassium Nitrate chemicals have been used in the new formulation. He said,

The court asked the Centre to file its reply on whether it approves the composition for green crackers and posted the matter for hearing on March 12. The bench also observed that once the new formulations are developed by expert agencies like NEERI and PESO, there should not be any problem in the manufacture of green crackers. During the hearing, the bench was told that conventional formulations with Barium Nitrate and Potassium Nitrate as oxidizers along with additives provided by CSIR-NEERI was prepared and fireworks were developed and tested for performance efficiency.

The minutes of the meeting said that new formulations were also prepared and tested for performance efficiency. It said that samples shall be assessed comparatively for emissions from conventional and reduced emissions crackers. It further said testing of light and sound emitting fireworks were demonstrated successfully in presence of PESO officers and fireworks manufacturers and nearly 200 memorandum of understanding (MoUs) have been signed with manufacturers. It said,

After the joint work in various fireworks manufacturing factories situated in an around Sivakasi and after observing materials, analysis/assessment of the manufacturing process and testing performance efficiency, it appears that the above-mentioned manufacturing shall reduce the emission of pollutants PM2.5 at least by 25-30 per cent (improved and green fireworks/green firecrackers) and it will be a win-win situation in the interest of all stakeholders in the public interest.

It said many unregulated and distributed manufacturers do not adhere to quality checks and therefore quality suffers leading to more pollution. “It is desirable that only PESO should be the authorised authority for any manufacturing of any size. NEERI-led system should be used for the testing of the quality of raw material for all and mechanism of bar code or QR code shall be used for all products to avoid any duplicates of Indian and foreign origin,” it said.

The court had earlier asked PESO to file norms and formulations which were required for producing green crackers as stated in the affidavit of the Ministry of Environment and Forest. The apex court had last year said that people in the country can burst firecrackers only from 8 pm to 10 pm on Diwali and other festivals, and had allowed the manufacture and sale of only “green crackers” which have low emission of light, sound, and harmful chemicals. It had carved out an exception for Christmas and the New Year eve, saying that crackers for these occasions would be burst between 11.55 pm and 12.30 am, since these celebrations start at midnight.

For Gurupurab festival, the court had later allowed fireworks to be carried out for one hour in the morning between 4 am to 5 am and one hour in the evening between 9 pm to 10 pm. The court had also banned the manufacture, sale, and use of joined firecrackers (series crackers or ‘laris’) saying that they cause “huge air, noise and solid waste problems”. It had said that noise and smoke emission limits of the crackers will have to be approved by PESO, a body under the Ministry of Commerce and Industry. To curb pollution in Delhi-National Capital Region (NCR), the court had directed the Centre, the Delhi government and state governments of NCR to permit community fire-cracking (for Diwali and other festivals), wherever it could be done.