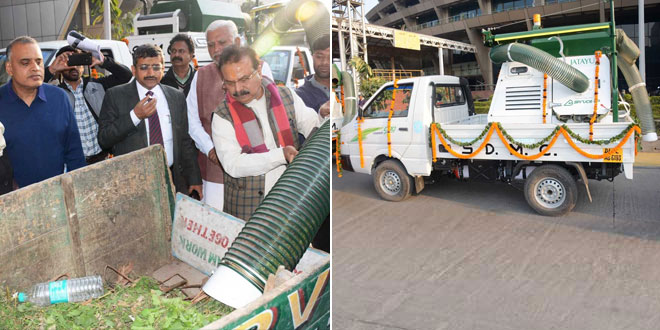 New Delhi: In a bid to accelerate cleaning on footpaths (pavements) of streets and market places, South Delhi Municipal Corporation (SDMC) Mayor Narendra Chawla deployed the first set of four new litter picker machines called ‘Jatayu’. These machines have powerful suction pumps which have the capacity of removing garbage in substantial quantity in one go from various markets. Delhi has been facing the problem of dust pollution for years due to the dust from unpaved roads, construction activities, traffic congestions and the dust generated by sweeping of roads and market places with brooms.

According to SDMC Jatayu machines have suctions units that are mounted on smaller CNG (Compressed Natural Gas) pick-up vehicles, so they pull in all the all the dust, leftovers on the streets and market places. An official from SDMC said,

Four machines- one for each zone, has been launched and will be cleaning major markets and central verges in a dust-free manner.

SDMC Mayor, Narendra Chawla said, “SDMC has been using 18 road sweeping machines and 40 water sprinklers to clean roads but footpaths are still being undertaken by safai karamcharies (sanitation workers). More such Jatayu machines will be procured after looking at the performance of these four machines while the 18 road sweeping will continue operating.”

According to SDMC, each machine is equipped with a 400 litre container. There is a powerful ‘vacuum cleaner’ fitted in the machine with a suction pump of 30 milibar pressure and a minimum of 1,350Litre/second airflow. The operator needs to point the pipe extension towards an area being cleaned and the vacuum cleaner will take care of the litter, garbage and dust.

Also Read: Air Pollution: CPCB Issues Notices To EDMC and SDMC for Inaction, Asks Why Shouldn’t They Be Prosecuted

Delhi has been reeling under air pollution crisis since last two months and the capital recorded an Air Quality Index of (AQI) of ‘severe’ category multiple times during this time period. The biggest contributor of pollution in the Capital and NCR are the fine particles suspended in the atmosphere which are hazardous, called Particulate Maters (PM) 2.5 and 10.

According to CPCB, most of the pollution complaints it receives are related to violation regarding dust-pollution caused by construction activities.  Last week, Lieutenant Governor (LG) of Delhi Anil Baijal directed implementing agencies in Delhi to take all possible steps to control air pollution in the territory.

Dust pollution causes many health problems among people, from dry cough to breathing problems and sore eyes to skin irritation, and according to doctors it worsens the condition of patients suffering from asthma.