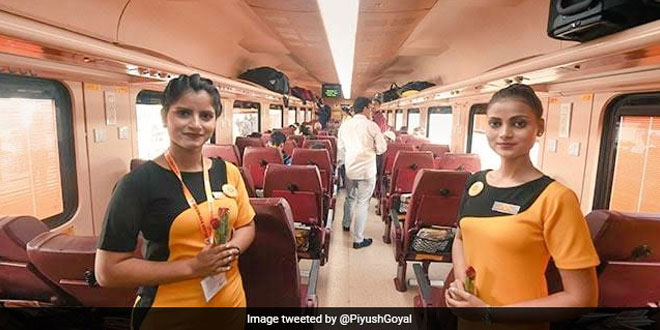 The biodegradable bottles were being manufactured by the Indian Railway Catering and Tourism Corporation (IRCTC) at its Mumbai bottling plant on a trial basis. This is the first time that the IRCTC, a central public sector enterprise under the Railways Ministry, has taken an eco-friendly measure by using degradable bottles. Each bottle is costing 15 paisa extra in manufacturing, compared to ordinary plastic bottles that are normally used.

Packaged drinking water is packed in polyethylene terephthalate (PET) plastic bottle, which is non-biodegradable. As per the IRCTC, in India approximately 10 lakh metric tonnes of PET bottles are consumed in packaging water, soft drink, juices etc.

IRCTC’s big leap in curbing the use of #SingleUsePlastic – successfully tests biodegradable packaging for #RailNeer. Supply commences on a pilot basis on the newly introduced LJN-NDLS-LJN #TejasExpress. #IRCTCSaysNoToPlastic #IRCTCForEnvironment pic.twitter.com/aqKKIluVHM

The biodegradable bottle is manufactured as a pre-form at the bottling plant and then it is blown as a bottle at another plant. The bottles have been tested at the Indian Institute of Packaging, Mumbai, and testing authorities noticed that biodegradation did occur when the bottles were disposed of under high-solid anaerobic digestion conditions.

Meanwhile, in a related development, the Uttar Pradesh State Road Transport Corporation (UPSRTC) has stopped providing water bottle to the passengers of the air-conditioned buses. The passengers will also not be allowed to carry their own plastic water bottles.

The decision has been taken by the UPSRTC administration after the Centre announced a ban on single-use plastic. The UP Roadways used to provide a complimentary 500 ml packaged drinking water to the passengers of the Scania, Volvo, Pink, Janrath and Shatabdi buses. The roadways administration has not yet made any alternate arrangement for water on the route. According to the UPSRTC officials, shopkeepers have been asked to stop selling plastic water bottles on bus stations.

Anaemia, A Health Problem In All States Except Kerala, Finds A New Study