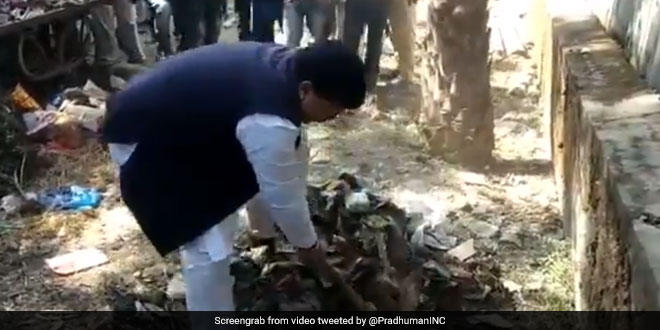 New Delhi: ‘Practice what you preach!’ With that thought, Madhya Pradesh Food and Civil Supplies Minister Pradhuman Singh Tomar picked up the spade and cleaned the waste lying around in a warehouse in Bada Ganpati locality in Indore. Sharing the video of the same on his social media account, the minister said, “Our Indore ranks first in cleanliness. To maintain this position, it is also our responsibility to keep the city clean. Today, after seeing the filth in the warehouse premises, I continued with #वास्तविक_सफाई_अभियान (real cleanliness campaign) and directed the warehouse management to keep the premises spic and span.”

Waste lying around in Indore may come up as a surprise given that the city has been adjudged as ‘India’s cleanest city’ for three years in a row in Swachh Survekshan, an annual urban cleanliness survey which assesses and ranks cities based on their cleanliness status. This year too Indore topped the charts in the first quarter (April – June 2019), and the second quarter (July – September 2019), in the recently conducted Swachh Survekshan league.

Mr Tomar was on a visit to a warehouse run by his ministry when he spotted dry waste lying inside the campus of the warehouse. Like a responsible citizen, he first cleaned up the waste and then spoke to the commissioner, enquiring about the mismanagement of the waste. Apparently, IMC is responsible for collecting waste and maintaining cleanliness in the city, but waste scattered inside the campus does not come under our purview. Also, if a warehouse is not willing to pay Rs. 2,000 per month for regular collection of waste, we are equally helpless.

On asking why he took the spade in his hands and cleaned waste involving paper, plastic, dry leaves, littered in the campus, Mr Tomar told the media,

Cleanliness is the responsibility of every citizen and hence I am cleaning this area.

Also Read: Swachh Bharat Mission: Transgender Community Of Ujjain Becomes A Changemaker As It Leads The Way To Cleanliness

In the video posted on twitter by the minister where he is seen speaking to media while cleaning up the area, Mr Tomar said,

Filth breeds mosquitoes and diseases like dengue and malaria which is neither good for us nor for our senior citizens and the next generation. Wherever you see waste or dirt, clean it up.

We are ensuring cleanliness in public places all across the city. Cleaning all government premises is not our job.

Mr Tomar has been quite proactive towards Swachh Bharat Abhiyan. This is not the first time when Mr Tomar has taken up the task of cleaning with his own hands. In the past, he has cleaned drains and toilets in Gwalior and Shivpuri.

Also Read: #BeatPlasticPollution: Indore Introduces ‘Thaila Bank’ To Phase Out The Use Of Single-use Plastic Bags

If there is one city that has managed to imbibe the values and achieve the goals of the Swachh Bharat Abhiyan (Clean India Mission) in its true sense, then it is Indore. From the start of the nationwide cleanliness campaign Swachh Bharat Abhiyan in 2014, Madhya Pradesh’s Indore has consistently been the top performer in the area of sanitation and waste management.

The results are a testimony of how Indore focusses on cleanliness throughout the year and how the idea of Swachh Bharat, importance of maintaining cleanliness, and following waste management practices has been imbibed into every citizen of Indore. We feel proud of coming up as a winner again and plan to continue with our swachh (clean) efforts, said Asad Warsi, advisor to Indore Municipal Corporation (IMC).