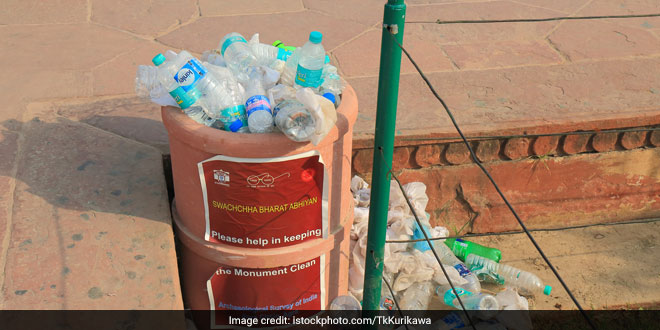 New Delhi: Not just restricted to marketplaces or shops, the plastic ban has reached the university campuses as well. To inculcate the idea of plastic free living amongst the youth and to combat the environmental impacts of plastic waste while making India more sustainable, the University Grants Commission (UGC) has directed all universities and higher educational institutions to ban the usage of single-use plastics on campus. As per the directives, the universities have to ban the usage of take-away plastic cups, lunch wrapped in disposable plastic packaging, straws, bottles, disposable food-service cups and plates, and plastic bags on their campuses.

The directive by the UGC comes after the Union Environment Ministry issued an advisory, stating that India is the global host of this year’s World Environment Day celebrations with the theme ‘Beat Plastic Pollution’, and this is an opportunity for collective efforts to reduce the usage of plastic in the country.

The University Grants Commission secretary Rajnish Jain wrote to the vice-chancellors and heads of over 800 universities and about 38,000 colleges on May 18, suggesting that students should be encouraged to refuse, reduce, and re-use plastic product in their daily uses.

Panjab University is committed to comply with the directions of the University Grants Commission to ban the usage of plastic in the education institutes. Panjab University also got a Swachh Bharat Abhiyan Committee which is dedicated for implementation of such initiatives.

In its communication to all vice-chancellors, the UGC apart from banning the plastic usage has also asked the universities and colleges to conduct networking activities among students on mass awareness on disposal of plastic, restrict the single-use plastic water bottles and encourage the use of refillable bottles.

To spread awareness on the importance of reducing plastic waste among people, the universities and colleges should also organise mini marathons (Envirothons), cultural programmes (nukkad nataks or street plays) along with cleanliness drives in collaboration with municipalities as part of the Swachh Bharat Mission.

“For the awareness related activities to beat plastic pollution, involve the participants from National Cadet Corps (NCC), National Service Scheme (NSS) and Eco-clubs,” the UGC said in its letter.

The objective of this initiative is to further the existing measures being undertaken by the Union Environment Ministry to reduce the usage of single-use plastics. Through this initiative, we aim to increase understanding of the plastic pollution problem among students. The awareness activities will help initiate conversations on campuses about the hazards of plastic waste so the students think of finding sustainable solutions to beat plastic pollution and make India a plastic-free country, said an official of the University Grants Commission.

Environmental activist Chitra Mukherjee, Head of Programmes, Chintan, a non-profit organisation that works with wastepickers and other recyclers to convert waste to social wealth, said

It’s a great initiative… measures on beating plastic pollution need to be taken at school and college levels since it is the youth that needs to become responsible as they hold the solutions for a sustainable waste conscious society in their hands. Also, we need to spread awareness so people get aware not just about the dangers of plastic and how its disposal is so problematic but also about the alternatives to plastic. Unless people stop purchasing plastic, the plastic ban can never be effective.

Notably, it’s not just universities and colleges that have been asked to ban plastic cups, bottles on campus but in the run-up to the World Environment Day celebrations on June 5, which India is hosting this year, the Environment Ministry has also asked schools to stop the use of plastics in their premises. To ensure its effective implementation, the Environment Minister DR Harsh Vardhan has written to the principals of schools across the country, requesting them to declare their schools free from plastic pollution, based on which the institutions will be certified as ‘Green School’.