New Delhi: “During the pandemic, we got a request for the ambulance service for a little girl who was extremely unwell. As always, my staff was sent with the ambulance. We got a call from the girl’s house asking if we had women drivers instead. It is then we realised that young girls and women don’t always feel comfortable around male drivers”, said Manjeet Kaur Shunty, President, Women Cell, Shaheed Bhagat Singh Sewa Dal. Delhi-based non-government organisation (NGO) Shaheed Bhagat Singh Sewa Dal was established with the objective of saving lives by making emergency services accessible. During the pandemic, the organisation cremated over 4,000 bodies along with providing ambulance service, hearse van and mortuary boxes, among others. And now, breaking the gender bias, the organisation has started pink ambulance.

On International Women’s Day (March 8) this year, pink ambulances, driven by women and managed by women were launched. It is for women patients to feel safer and more at ease at a time when they most need comfort.

A woman tends to open up emotionally more to a fellow female being. And in an ambulance, during a crisis, when a patient needs utmost care, comfort and consolation, what better than another woman providing emotional support. We first did 15 days trial and saved two lives. Following this, we launched Pink Ambulance service across Delhi.

As part of the initiative, four Pink Ambulances have been launched with four women drivers and attendants. The 24×7 service is currently available across Delhi-NCR for free. 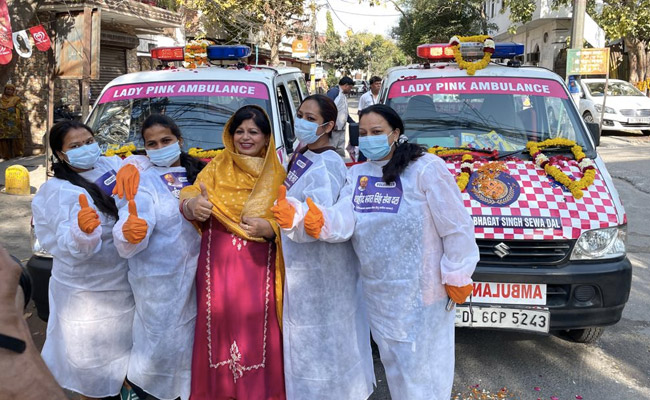 The team behind Pink Ambulances of Delhi

These were the women in our team who helped cremate dead bodies in Seemapuri, Delhi. When sons were refusing to cremate their fathers, we were the ones who stepped in. I salute these women drivers for their courage – nothing scares them, nothing deters them.

Pooja Bawa, Pink Ambulance Pilot believes if an individual has a skill set to offer their services, they should. She said,

If someone is in need of your services, and you have the skill for it, you should get involved. And that was our experience too. During the pandemic, we would go to pick up women patients as they didn’t feel safe around male staff members.

Also Read: Here Is How Single Women Network In Rural India Is Breaking The Gender Bias And Working For A Sustainable Tomorrow

Unnati Gupta, an entrepreneur got associated with Shaheed Bhagat Singh Sewa Dal a year ago and is a Pink Ambulance Pilot. She informed that the women cell is creating awareness about Pink Ambulances by taking it to different colonies in Delhi. She said,

I am a woman and I can drive. By being part of the initiative, my goal is to ensure timely medical services to all women, at any hour of the day. Since my office is nearby, it is easier for me to juggle between driving an ambulance and managing work.

This initiative is not only empowering women but also breaking stereotypes of a male dominated profession. Every day is a women’s day for Shaheed Bhagat Singh Sewa Dal. This unique initiative with pink ambulances driven by lady drivers and an all-women’s staff makes all the difference to women patients during their most difficult times of medical distress.

Also Read: Here Is How Khabar Lahariya, An All Women Led Digital Newsroom Is Breaking The Gender Bias

Related Topics:
Delhi Health Leaving No One Behind
Up Next

COVID-19: The Challenges Of Tracking The Variants