New Delhi: The eldest of six children- four sisters and two brothers, Kavita Devi was married off at the age of 12 years. She had never attended school as a child. It was in 1989, when she was almost an adult, the central government under its women literacy programme started a school for women in Banda, Uttar Pradesh where Ms Devi lived. Ms Devi enrolled herself in that school and learnt how to read and write. From being married off early to getting literate and becoming the Editor-in-Chief of an all-women led Digital Newsroom ‘Khabar Lahariya’ which is working in the rural areas of Uttar Pradesh, Madhya Pradesh, Bihar and Chhattisgarh, Ms Devi’s journey has been full of challenges. Along with her, all the other women of Khabar Lahariya has fearless and extraordinary. The documentary based on the fearless women journos of Khabar Lahariya ‘Writing with Fire’ is in the running for this year’s Oscar Awards. On this International Women’s Day, the team of Banega Swasth India spoke to Ms Devi, who is also the co-founder of Khabar Lahariya and Nazni Rizvi, Senior Reporter at Khabar Lahariya who are breaking gender stereotypes every day just by doing their job.

Khabar Lahariya, which literally means ‘News Waves’ in Hindi was started as a local language newspaper in 2002 with the support of a Delhi-based gender education organisation called Nirantar. 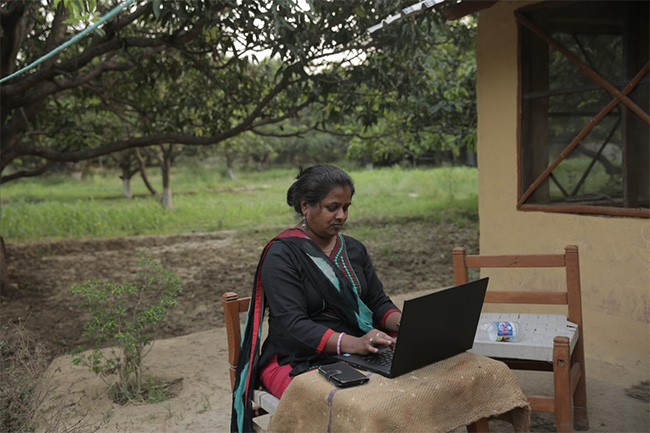 The NGO had helped the government execute the literacy programme in Uttar Pradesh. While talking about how the Khabar Lahariya began, Ms Devi said,

Once the government’s literacy programme was over, Nirantar started a four-page broadsheet newspaper called ‘Mahila Dakiya’ with an aim to continue to educate women and give them a voice. Not only did it enable the sustained production of reading material in local languages and promoted an overall environment of learning, but it broke gender and caste barriers too. This is how some women of Banda including me entered the world of print journalism which was mostly dominated by men in the region at that time. I do not have any degree or formal education in journalism. Mahila Dakiya was discontinued and in 2002, Khabar Lahariya was launched with the support of Nirantar and a staff of seven women who wrote, produced and distributed the fortnightly newspaper in Bundeli and Hindi languages. It was an eight-page weekly local newspaper that covered everything from local to global news. 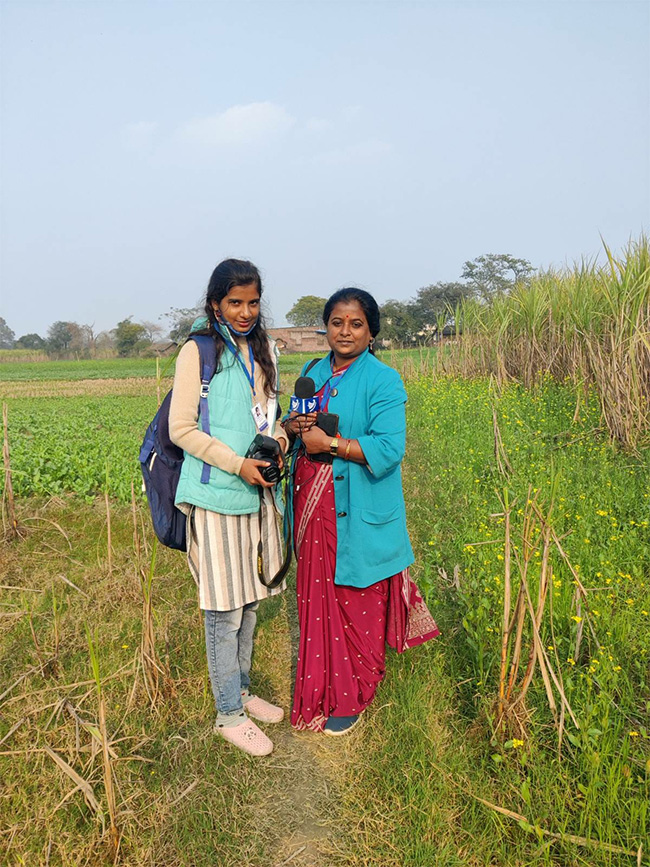 Khabar Lahariya, which literally means ‘News Waves’ in Hindi was started as a local language newspaper in 2002

Because the newspaper was not taking any ads, it was becoming difficult for them to sustain and also more and more people started consuming digital news, so in 2015, Khabar Lahariya became a completely digital platform and was taken up as a brand by a Delhi based media organisation called Chambal Media. Khabar Lahariya is still not taking any commercial ads. It relies on Chambal media, grants from Independent and Public Spirited Media Foundation and takes up projects of UNICEF and other organisations, helping them produce digital reading materials, awareness building projects and other such collaborations.

According to the spokesperson, as a digital news outlet, Khabar Lahariya is currently reaching over 10 million people. Currently, it has over 30 reporters out of whom about 18 are working in 14 districts of UP, some in 7 districts of MP and some in 2-3 districts of Bihar and Chattisgarh. 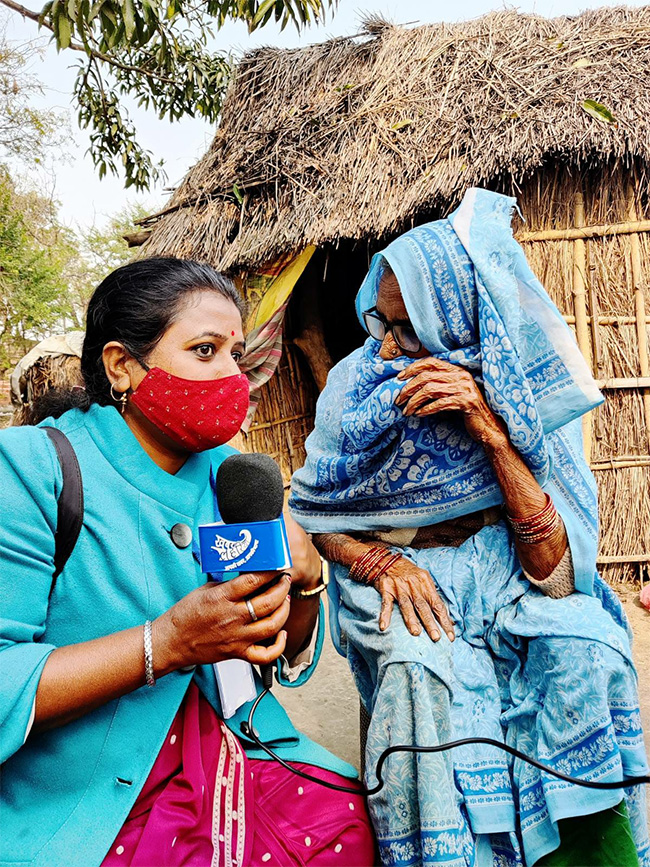 What started as a medium to learn to read and write, became a passion and career path for Kavita Devi and others. According to Ms Devi, the objective of Khabar Lahariya was to produce local and independent content, bring a feminist voice to local media, and establish women as journalists in small towns and villages. She said,

Everyone in my village believed that the biggest challenge of the field of media is that women cannot be journalists. When I started working, there were no women reporters in my area and even in the entire Uttar Pradesh. With an aim to bridge this gap and to break the bias against women, when Khabar Lahariya started, we decided that we will train and bring more and more women into the field of journalism. We recruit women and girls from villages, those who know how to read and write and even those who do not know how to read and write. Our main aim is to bring the hyper-local stories from the region. And while recruiting, during interviews we ask candidates to talk about a story from their village or do some role-playing exercise and our experience has been that it does not matter if a woman has undertaken any kind of formal education. What really matters is the passion for storytelling and the determination to get to the bottom of a story. 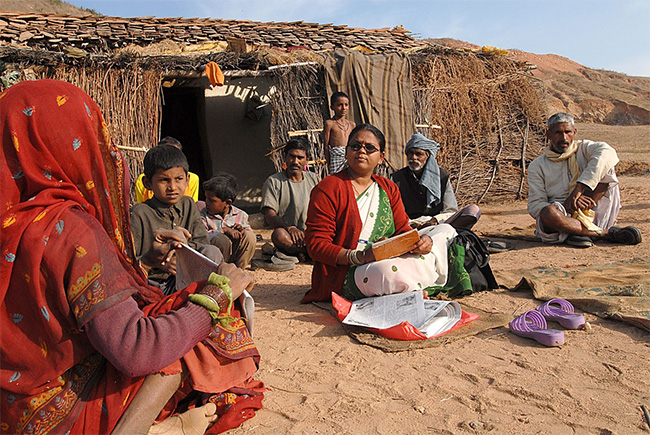 With an aim to train more rural women to become reporters, Khabar Lahariya is launching Chambal Academy in April this year. Ms Devi stressed that the organisation is working towards recruiting more local women and those from underprivileged communities.

We do not leave anything. We cover as many things as we can and we try to do it better than others as we bring the local people’s perspective and feminist lens to our news coverage.

While talking to NDTV about the challenges faced by women reporters in rural India, Nazni Rizvi, Senior Reporter, who has been reporting on local politics, crime, accidents and dacoits for Khabar Lahariya for the past 13 years said,

I am a mother of three girls and two boys and belong to Paprenda, a small village, Banda district in Uttar Pradesh. I came into the field of journalism by accident. I was looking for a job and got to know about Khabar Lahariya. My family and people in my village were against this. Taking up the job as a reporter, going out, talking to people, taking interviews, taking risks were all considered as something that only men should be doing. They called me shameless. Even today, they do not support me being a reporter. When we go out to take interviews, a lot of time, especially during the initial days, people did not take us seriously. We had to be bold to ask questions and get our stories.

Ms Rizvi is also known to many viewers through her show ‘Bolenge Bulvayenge, Hass ke Sab Keh Jayenge’, where she tackles social problems and feminist issues with a light-hearted flair. Ms Rizvi, who also manages online groups of local media professionals and moderates discussions on gender, caste and communalism on these groups shared that even during the COVID-19 pandemic, Khabar Lahariya journalists were on the field, reporting about the hard time that people in the villages were going through because of the lockdown. She said that during Covid, Khabar Lahariya undertook many initiatives to connect the people in need with the available support. 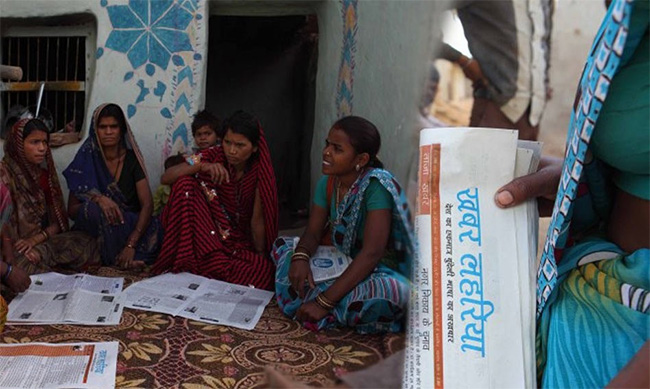 Khabar Lahariya has over 30 reporters out of whom about 18 are working in 14 districts of UP, some in 7 districts of MP and some in 2-3 districts of Bihar and Chattisgarh

According to Ms Devi, while there is still a digital divide in the country, people are increasingly moving towards online news consumption. She said,

During Covid, we got calls from states like Maharashtra and others where we are not working. This made us realise that Khabar Lahariya has built a vast reach. Women from across the country watch our programmes. She may not own a mobile phone but she is connected with us through her son/daughter’s mobile phone.

Also Read: International Women’s Day 2022: Meet Foolmati, A Farmer Who Changed The Face Of Agriculture In Her State

Related Topics:
International Women’s Day Leaving No One Behind Women’s Day
Up Next

‘Educating The Women Should Be Our Number One Priority’: Susan Ferguson, UN Women Representative India On International Women’s Day