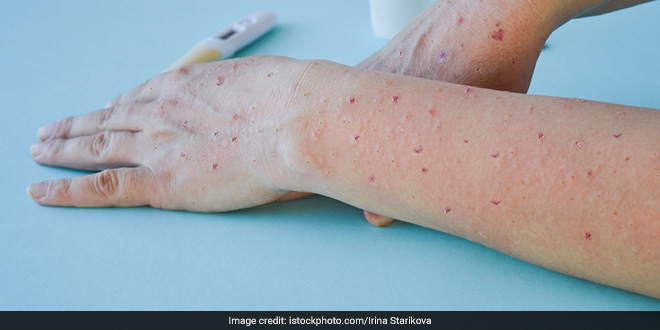 Samples of a 22-year-old man, who died in Kerala last week, have come out positive for Monkeypox on August 1

New Delhi: A task force on monkeypox has been constituted to closely monitor the emerging situation in the country and decide on response initiatives to tackle the spread of the disease, official sources said on Monday.
It will also provide guidance to the government on expansion of diagnostic facilities in the country and explore emerging trends related to vaccination for the disease, the sources told PTI. Samples of a 22-year-old man, who died in Kerala last week, have come out positive for monkeypox on Monday (August 1). The man had recently returned from the UAE where also his samples had tested positive for the disease, official sources said.

India has reported a total of five cases of the disease so far.

The decision to constitute the task force was taken at a high-level meeting held on July 26 at the level of the principal secretary to the prime minister to review the ongoing public health preparedness in the country.

The National Aids Control Organisation and the Directorate General of Health Services in the Health Ministry have been asked to work on a targeted communication strategy to promote timely reporting, detection of cases and management of cases, an official source said.

Instructions were given to operationalise the Indian Council of Medical Research (ICMR) network of labs and make arrangements for requisite diagnostics of monkeypox disease.

Globally, over 16,000 cases of monkeypox have been reported from 75 countries.

The Union Health Ministry has undertaken a number of initiatives which includes strengthening of health screening at Points of Entry and operationalisation of 15 laboratories under the ICMR to undertake testing for monkeypox disease.

It also issued comprehensive guidelines on the disease covering both public health as well as clinical management aspects and regular interaction with states were held virtually as well as Central multidisciplinary teams were deployed to affected states.

According to the WHO, monkeypox is a viral zoonosis — a virus transmitted to humans from animals — with symptoms similar to smallpox although clinically less severe.

It can also be transmitted through direct contact with body fluids or lesions, and indirect contact with lesion material such as through contaminated clothing or linen of an infected person. Animal-to-human transmission may occur by bite or scratch of infected animals or through bush meat preparation.

The symptoms include lesions which usually begin within one to three days from the onset of fever, lasting for around two to four weeks and are often described as painful until the healing phase when they become itchy. A notable predilection for palm and soles is characteristic of monkeypox, the guidelines stated.

Monkeypox Vs Chickenpox: What Are The Key Differences, Doctors Explain