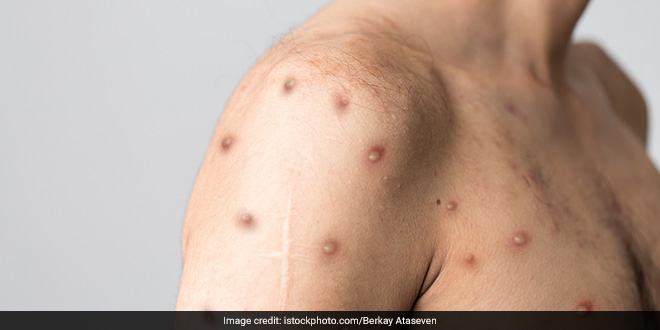 The researchers noted that solitary lesions and swollen tonsils were not previously known to be typical features of Monkeypox infection,

London: People infected with monkeypox during the ongoing global outbreak are displaying symptoms not typically associated with the viral infection, according to a study published in the British Medical Journal.
The findings are based on 197 confirmed monkeypox cases at an infectious disease centre in London, UK, between May and July 2022. Some of the common symptoms they described include rectal pain and penile swelling (oedema), which differ from those described in previous outbreaks, the researchers said. They recommend that clinicians consider monkeypox infection in patients presenting with these symptoms.

According to the researchers, those with confirmed monkeypox infection with extensive penile lesions or severe rectal pain “should be considered for ongoing review or inpatient management.” All 197 participants in the study were men (average age 38 years), of whom 196 identified as gay, bisexual, or other men who have sex with men.

All patients presented with lesions on their skin or mucosal membranes, most commonly on the genitals or in the perianal area.

Most (86 per cent) of patients reported systemic illness (affecting the entire body). The most common systemic symptoms were fever (62 per cent), swollen lymph nodes (58 per cent), and muscle aches and pain (32 per cent).

A total of 71 patients reported rectal pain, 33 sore throat, and 31 penile oedema, while 27 had oral lesions, 22 had a solitary lesion, and 9 had swollen tonsils.

The researchers noted that solitary lesions and swollen tonsils were not previously known to be typical features of monkeypox infection, and could be mistaken for other conditions.

Overall, 20 (10 per cent) of participants were admitted to hospital for the management of symptoms, most commonly rectal pain and penile swelling. However, no deaths were reported and no patients required intensive hospital care.

Only one participant had recently travelled to an endemic region, confirming ongoing transmission within the UK, and only a quarter of patients had known contact with someone with confirmed monkeypox infection, raising the possibility of transmission by people with no or very few symptoms.

The study authors acknowledge some limitations, such as the observational nature of the findings, the potential variability of clinical record keeping, and the fact that the data are limited to a single centre.

However, they said these findings confirm the ongoing unprecedented community transmission of monkeypox virus among gay, bisexual, and other men who have sex with men seen in the UK and many other non-endemic countries.

Understanding these findings will have major implications for contact tracing, public health advice, and ongoing infection control and isolation measures, the researchers added.

“Living With Covid”: Where The Pandemic Could Go Next