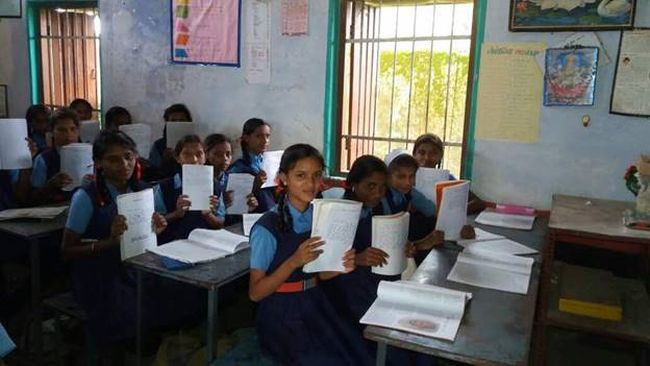 New Delhi: Armed with broom, gloves and other cleaning equipments, around 3.2 lakh children studying in more than 2,000 schools across the Dakshina Kannada District Zilla Panchayat, engage in cleanliness related activities, every Saturday. This is the Panchayat’s way of meeting their next Swachh goal, which is attaining the open defecation free plus (which means total sanitation in terms of solid waste management, improved sewerage lines, storm water drains and pucca cement roads, in addition to open defecation free tag) status by next year. The initiative name ‘Swachh Shanivara’ was started three months ago by CEO Dr Ravi in all the schools of the Panchayat. He says,

We have achieved the coveted tag of open defecation free, now the idea is to make children agents of change and move towards open defecation free plus tag. Swachh Bharat isn’t limited to just sweeping streets or building toilets, the concept of hygiene is also a vital part of the campaign. And through our ODF plus activities we plan to raise our hygiene standards.

Every Saturday, we observe sanitation day or swachh divas in all the panchayat schools. From Indoor to outdoor, various cleanliness activities are conducted in the form of lectures on sanitation, alongwith students and teachers carrying out several cleanliness tasks for 45 minutes within the school.

He also said now Swachh Bharat Abhiyan has become a part of every school’s curriculum.

Apart from school children the panchayat has more than 1,600 anganwadis (mother and child care centres) where more than 10,000 women mothers are involved in the ‘Swachh Shanivara’. Every week, awareness programmes of 60 minutes are held to educate women about sanitation activities that they can adopt to maintain their environment clean.

A Bell With A Cause

Taking a step forward, the administration has also developed a jingle on swachhta which every resident of the panchayat will soon be able to hear whenever their house doorbell will ring.

Currently the administration is in the process of installing doorbells in every house which will have swachhta poem. For now, the pilot project has been executed in Kallige village of Bantwal Taluk which has nearly 1,500 households.

These jingle doorbells will serve as a reminder to people to keep their houses clean and use toilets. The bell has been placed at nine places in the panchayat office, including my office, added Dr Ravi.

Thanks to these swachh steps taken by the Dakshina Kannada which helped it bag the Swachhatha Darpan award of the Union government last month. It is among the 46 districts in the country, and the only two in Karnataka to receive such an award.

Take A Cue, India! Innovative Ways Through Which The World Is Dealing With Public Urination