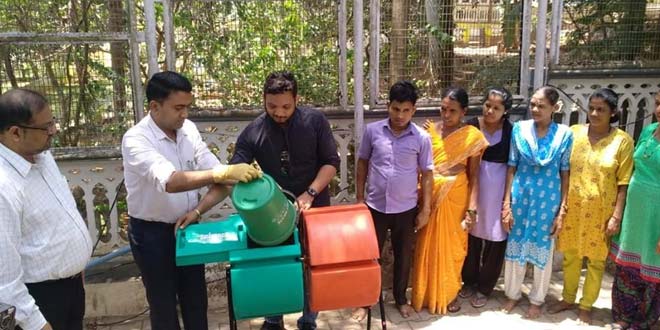 New Delhi: As the state of Goa celebrate its 32nd Statehood Day on May 30, Chief Minister Dr. Pramod Sawant has come up with a new way to inspire people to practice waste management in their homes, in a bid to reduce the burden on the state’s dumping yards. While addressing the people in a press conference conducted at his home recently, Chief Minister Sawant took a pledge to treat all the wet waste generated in his home. He also said that along with him, his government will also do the same. He nominated three other ministers to take up the challenge of managing their waste at source and nominate three other people each to do the same.

The Chief Minister also launched an awareness campaign ‘Clean Goa Green Goa’ to encourage citizens to segregate waste at source and to convert their waste into compost which can be used as fertilizer. The Chief Minister has also initiated the installation of bio-digesters in each government office to treat waste. Bio-digesters are the specially designed tanks that contain certain bacteria which help decompose organic waste.

Chief Minister @DrPramodPSawant launched an awareness campaign "Clean Goa Green Goa" to encourage citizens to convert their waste into compost for use as fertilizers. pic.twitter.com/idlgRw1RIT

In the wake of a major garbage dump fire that broke out on May 27 near the solid waste management plant at Sonsoddo, this comes as a welcoming move, said a senior official from Margao Municipal Council (MMC) while talking to NDTV about Chief Minister’s challenge.

According to the official, being one of the most popular tourist places in the country, garbage is a major problem in Goa. As per experts, the Sonsoddo dump yard was repeatedly called as a ticking biohazard and a threat to the residents of that area.

Considering the repercussions of inadequate waste management that could result in massive garbage fires and in a bid to control the practice of garbage burning, the Chief Minister asked the people in his state to buy a home composter. He said,

I will treat the waste I generate myself. My secretariat, my government offices will also be part of this process. I have also nominated Deputy Chief Ministers Vijai Sardesai, Manohar Ajgaonkar and Chandrakant Kavlekar, leader of the Opposition to take a similar oath to start treating their own waste at home and then they have to nominate three people and this will go on. People will emulate them. Home composters cost ₹1,000 to ₹7,000. You could also make one from a bucket.

Along with the Chief Minister, Governor Mridula Sinha, who is also one of the ambassadors of the Swachh Bharat mission also rooted for cleanliness. She urged people to make Goa the cleanest state in the country. She said,

We have to continuously renew and accelerate our efforts to keep our state clean of garbage and filth. This is a matter of culture. We should collectively work to achieve this objective and attain the status of being the cleanest State in India.

According to an official from Goa Waste Management Corporation, Goa generates approximately 765 tonnes per day (TPD) of municipal solid waste out of which 420 TPD of waste is being treated currently. The state has recently announced that it will meet all targets under Swachh Bharat Mission by August 31 and aspires to become a waste free state soon, as envisioned by the former chief minister late Manohar Parrikar.

#BeatAirPollution: World’s Most Polluted Capital City, Delhi To Get Over 23 Lakh New Trees This Year