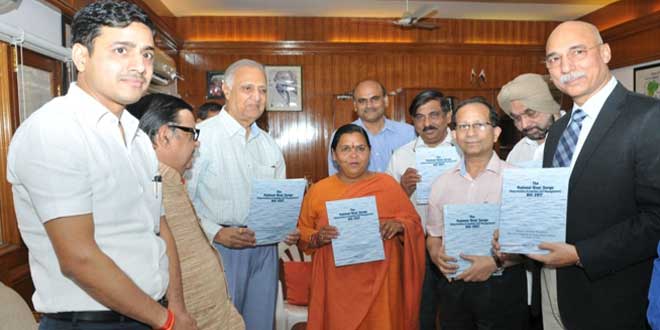 The Draft Ganga Act that focusses on cleaning up the river Ganga and identifies the challenges to achieve this was submitted to the Union Minister of Water Resources, River Development and Ganga Rejuvenation Uma Bharti on April 12. The draft act was prepared by a committee constituted in July 2016. It consisted of Justice Shri Girdhar Malviya (Retd.) who was the Chairman of the committee, Shri V.K.Bhasin, Ex-Secretary, Legislative Department, Govt. of India, Prof. A.K. Gosain, IIT Delhi and Prof. Nayan Sharma, IIT Roorkee. Shri Sundeep, Director, National Mission for Clean Ganga (NMCG) was appointed the Member Secretary of the committee. The committee was formed to put forward comprehensible solutions for challenges faced by the Ganga due to industrial, agricultural and domestic overuse. It was challenging for the committee to balance the existing religious and social faiths related to Ganga, along with the decreasing availability of water in the river in comparison to the increasing demands.

The draft Act focused on two principal aspects related to the Ganga – cleanliness and uninterrupted flow. These were the principal areas of concern the committee looked into and recommended stricter provisions to hold stakeholders accountable. The committee has recommended responsible use of resources made available by the river Ganga.

The draft Act gives a new perspective to the mission of cleaning Ganga, as there are several recommendations, which when implemented, will see people becoming more responsible towards the Ganga, said Samir Sinha, spokesperson, Ministry of Water Resources, River Development and Ganga Rejuvenation.

The draft Act will be further sent to the Ministry of Environment, Ministry of Drinking Water and Sanitation and Ministry of Urban Development, as these are some of the ministries who have collaborated with the Ministry of Water Resources and contributed towards NMCG over the last few years. These ministries will be asked for further suggestions and recommendations on the draft, as they are also committed to the cause of a clean Ganga.

The draft will now be sent to different ministries which play pivotal roles in contributing towards a cleaner Ganga. We want inter-ministerial discussions on the draft Act and suitable suggestions before placing it in the Parliament, said Mr Sinha.

Previously, Union Minister Uma Bharti had also sought support from the five state governments of Uttar Pradesh, Uttarakhand, Bihar, Jharkhand and West Bengal to look at the issue of Ganga rejuvenation. While the states of Bihar, Jharkhand and West Bengal already showed enthusiasm at Ms Bharti’s efforts in cleaning Ganga, after the recent poll victories of National Democratic Alliance in Uttar Pradesh and Uttarakhand, the newly formed governments of both these states have also assured the Union Minister of full cooperation.

We are hopeful that representatives from all the five states will agree to the suggestions of the draft Act. We also encourage them to make suitable recommendations, especially with regard to special requirements of each state. If all goes well, we are confident of tabling the draft in the Winter session of the Parliament, said Mr Sinha.