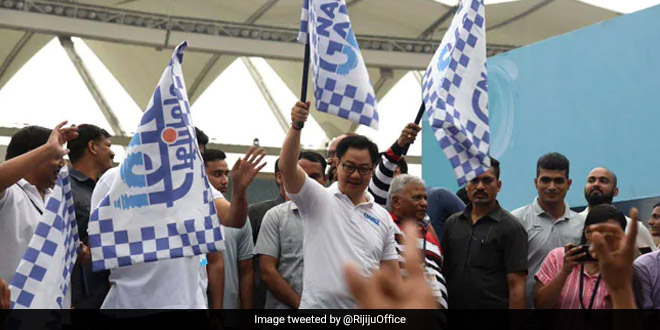 New Delhi: Jal Shakti Minister Gajendra Singh Shekhawat on Sunday called upon people to support the government in its ambitious ‘Namami Gange‘ mission and lend their hands to make it a success. “We need the support of common people to make Ganga, its basin and its tributaries clean and pure. Government’s efforts alone will not bear fruits. The society as a whole will have to connect with it with a sense of collective social responsibility,” he told reporters here after flagging off the ‘Great Ganga Run’ from Jawaharlal Nehru Stadium on Sunday.

The marathon was organised with an aim to create awareness on the Namami Gange mission. Union Minister for Youth Affairs and Sports Kiren Rijiju and Minister of State Jal Shakti Ministry Ratan Lal Kataria were also present at the event.

Talking about the run Minister Shekhawat said the government had received registrations of over 20,000 people. He said,

We had online registrations. Almost 20,000 enrolled for this marathon. It is nice to see so many people turning up for the marathon. The runners’ enthusiasm here shows this event will definitely increase the sense of responsibility in the society.

Mr. Shekhawat added that a Ganga Expedition is also being organised starting October 9 to connect people with the mission.

Sports Minister Kiren Rijiju, while speaking to reporters, said: “Ganga is very important for the country and we needed to create awareness. In this marathon, people from every age group are participating. I would like to congratulate the organisers on getting a large number of people involved with Namami Gange marathon.”