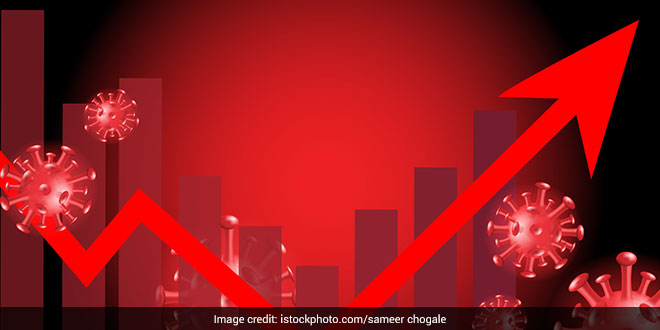 It has been over a week since Delhi started to report over 1,000 new cases of COVID-19 a day

New Delhi: On Wednesday (April 27), Delhi reported 1,204 fresh COVID-19 cases, which is 41 per cent of the total new cases reported in India in 24 hours. Delhi’s R-value which indicates the spread of the infection was recorded at 1.68 implying that every infected person can pass on the infection to 1.68 (almost 2) other people and they can further create the chain. It has been over a week since Delhi started to report more than 1,000 new cases a day and that’s worrisome, giving birth to the fear of the fourth COVID-19 wave in the country. Talking about the rising number, Dr Naresh Trehan, Chairman and Managing Director, Medanta said,

We are actually not seeing any of this abating and the only thing to do is to sit up and get back into some of the COVID-appropriate behaviour that we had before. Mask up, most definitely if you are going out in any crowded space; schools have to enforce masking and distancing very strictly. Children may get chatty and attracted to watch each other and then they take off their masks and that’s where a lot of cases are coming from. Wear a mask, practise social distancing, and all eligible population should take the booster dose.

Dr Trehan asserted that a precautionary dose of the COVID-19 vaccine does protect from the infection and it’s important especially when some people are getting infected thrice. Repeated infections are detrimental to anybody’s health, he said.

The surge in cases is alarming also because earlier this month schools across Delhi-NCR reopened after almost two years. There has been a huge setback to education in India. According to the experts, The Omicron variant is milder and children usually don’t get a severe disease but they can be the carrier of the infection. Should schools shift back to online mode? Dr N N Mathur from Lady Hardinge Medical College said,

The disease is less severe in children and that is something we have seen and established as well. But the challenge is to enforce a child to wear a mask all the time in school. As of now, things are not that bad and we can continue with school for some time, but we have to watch it on a daily basis.

Earlier this month Delhi had relaxed the mandate on wearing face masks by removing the fine but after a recent surge in the cases in the national capital, the mask mandate has been brought back along with a fine of Rs. 500 on not wearing masks. Will the situation improve with this? Dr Trehan said,

People must realise that the SARS-CoV-2 is spreading and this is how a wave starts unless we react to it right away. There is no room for complacency. Secondly, the testing is not as intense as it used to be. We need to test more, track down the cases and actually take the hotspots out of circulation.

Also Read: DCGI Grants Emergency Use Authorisation To Corbevax For Those Aged 5-12, Covaxin For 6-12 Age Group

The slight rise in the cases cannot be called another wave yet but according to Dr Trehan, we don’t know what will happen next since another variant is lurking in the background.

Omicron is mild, that’s true; there is less hospitalisation and less number of deaths but, anybody who gets the infection still suffers. In India, it becomes even more important because the daily wage people, if they get knocked out of action for 10-14 days, they suffer economically as well. Considering India’s population, even a small percentage of the population getting sick is a very large number numerically and it creates a lot of economic distress at the bottom level and we should be responsible for that, he said.

The Impact Of Coronavirus ‘Is Down But Not Out’, Exercise All Precautions, Warns Health Expert