New Delhi: On September 11, two children died in Haryana’s Pinjore district due to diarrhoea. They were among 60 people, mostly children, diagnosed with Diarrhoea in this Haryana district. On September 15, three members of a family succumbed to chronic diarrhoea in Chhattisgarh’s Gaina village. Such cases of diarrhoeal deaths are a frequent occurrence in India, with hundreds of people suffering from the disease at once. As per the National Health Mission data, around one lakh children die due to diarrhoea in India, ever year.

These figures highlight the need for awareness, especially since diarrhoea can be easily treated if the symptoms are noticed in time along with the help of oral re-hydration solutions, according to experts.

According to World Health Organisation (WHO), diarrhoeal disease is the second leading cause of death in children under five years old (after pneumonia), and is responsible for killing over 5 lakh (5,25,000) children every year round the globe. 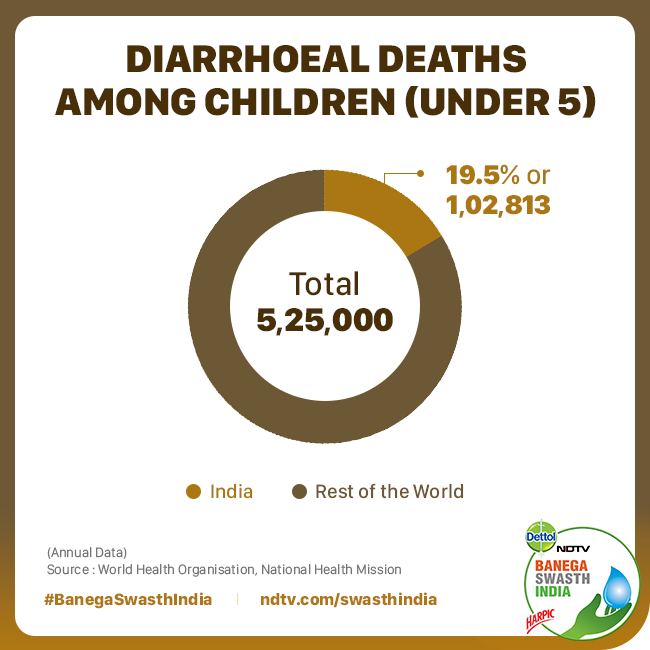 Causes And Impact Of Diarrhoea

According to WHO, Diarrhoea is a gastrointestinal infection, which can be caused by a variety of bacterial, viral and parasitic organisms. Infection is spread through contaminated food or drinking-water, or from person to person as a result of poor hygiene. It can pass on to infants if they are not exclusively breastfed in the first 6 months of their life.

WHO also states that earlier severe dehydration and fluid loss were the main causes of diarrhoea deaths but now other causes such as septic bacterial infections are likely to account for an increasing proportion of all diarrhoea-associated deaths. Children who are malnourished or have impaired immunity, as well as people living with HIV, are most at risk of life-threatening diarrhoea.

Arundati Muralidharan, Policy Manager from WaterAid India says that elements of WASH or Water, Sanitation and Hygiene, have a major role to play when it comes to the cases of Diarrhoea in India. She told NDTV,

We see so many villages where they’re still drinking unfiltered and untreated water, which is one of the major causes of Diarrhoea. When it comes to sanitation, we have done a good job under the Swachh Bharat Abhiyan by building 11 crore toilets and ensure access to sanitation for all. So we have stopped one root of transmission, by ensuring there’s no contact with faecal matter laying openly in the environment, however, even with sanitation, the disposal of faecal matter is a concern. We have seen a lot of times, owing to faulty toilet technology, faecal matter is re-entering the environment and contaminating our water sources. So we need to ensure that the toilets built are safe and doing their job – which is preventing contact between humans and faecal matter.

When it comes to water, safe drinking water is of paramount importance, she said,

We need to make sure we are not consuming contaminated water in any form. How you store the water at home, even if it is filtered by RO system, is also a point of concern. Creating greater awareness and ensuring clean and safe water for the people, especially the children is imperative.

Ms. Muralidharan also elaborated on the importance of hygiene to prevent Diarrhoea,

I think hygiene is the biggest missing piece of the puzzle. So you have toilets that you’re using to relieve yourself but then you are not washing your hands, so the faecal matter is in your hands. You need to wash your hands with soap and water and that is something we need to look into – how to promote hygiene. Even for mothers, when you’re feeding your babies, taking care of infants, and various daily activities, they need to ensure their hands are clean too. We need to rope in Accredited Social Health Activist or ASHA workers and Anganwadi workers to promote hygiene in this way. 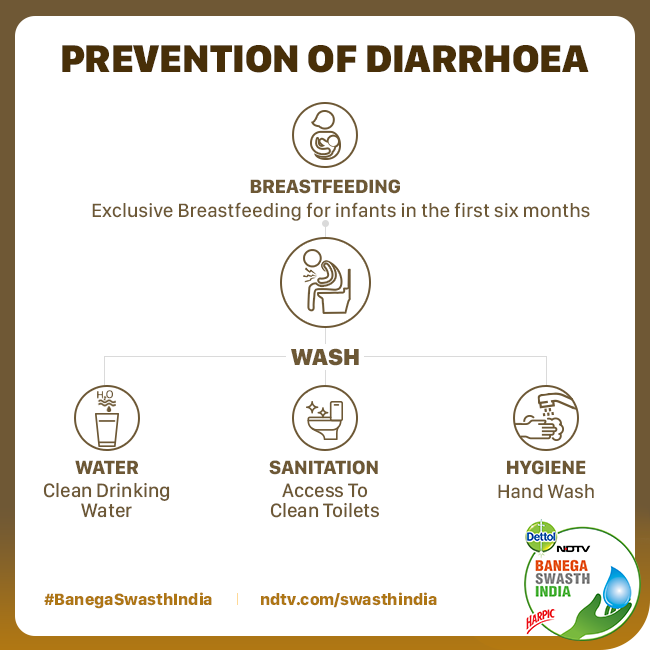 On the other hand, diarrhoea can also result in malnutrition. A report by WaterAid India titled “The interlinkages between water, sanitation and hygiene (WASH) and nutrition,” states that reoccurrence of diarrhoea for a child below the age of 5, can lead to permanent damage to her or his immune system and can lead to stunting. It states,

When children suffer from repeated bouts of diarrhoea, intestinal worm infections, their bodies are no longer able to absorb nutrients, leading to stunting – a form of chronic malnutrition in which children are short for their age. Stunting hampers physical growth as well as cognitive development.

“If a child is stunted due to this at such an early age, it can’t be reversed as this is a lifetime condition. So that’s how grave diarrhoea is,” Ms. Muralidharan explains.

A child with diarrhoea needs to continue eating regularly. While recovering, she or he needs to be consume more food than usual to replenish the energy and nourishment lost due to the illness.

Vinod K Paul – Member, National Institute of Transforming India, explains that the disease can last several days, and can leave the body without the water and salts that are necessary for survival. He said,

Children should be given lots of fluids and nutritious foods along with a special solution called oral rehydration salts (ORS) and zinc to help reduce the severity of the illness. For every episode of diarrhoea, start zinc in any form and continue for at least 14 days, from the first day.

Diet also plays a major role in treating diarrhoea. Recommended foods for a child with diarrhoea are well-mashed mixes of cereals and beans, fish, well-cooked meat, yogurt and fruits. A little oil can be added to cereal and vegetables, about 1 or 2 teaspoons. Foods should be freshly prepared and given to the child five or six times a day.

After the symptoms of diarrhoea stop, extra feeding is vital for a full recovery. In this stage the child needs to be given more food than usual, including breast milk. A child is not fully recovered from the disease until she or he is of the same weight before the illness began. 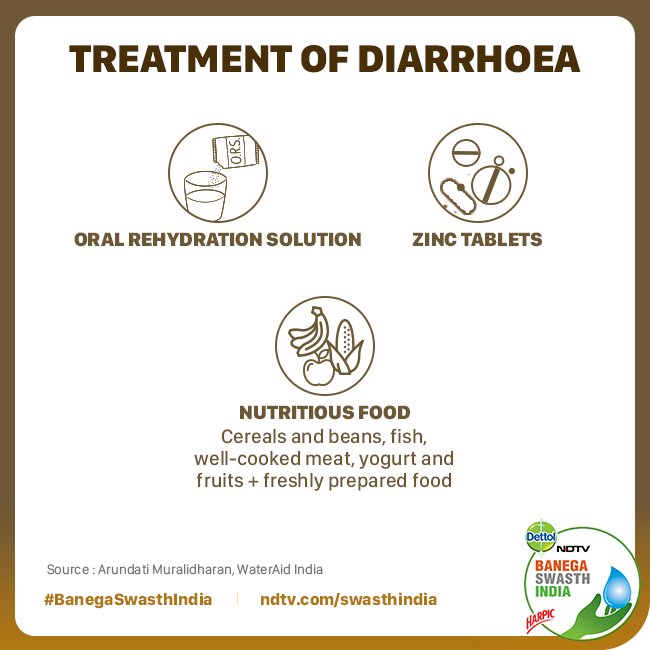 The Ministry of Health and Family Welfare launched the Intensified Diarrhoea Control Fortnight (IDCF) in 2017 with the aim to intensify efforts to reduce child deaths due to diarrhoea.

The Ministry said it was ‘a national priority’ to bring health outcomes among children to a level equitable with the rest of the world.

Under the campaign that run from May 28 to June 8 in 2019, nearly 12 crore children under the age of 5 were reached, from various districts, villages and cities, to create mass awareness about the most effective and low-cost diarrhoea treatment— ORS solution and Zinc tablets.

During the fortnight, ASHA workers distributed ORS packets to households with under-five children in their respective villages. ORS-Zinc Corners were set-up at health care facilities and non-health facilities such as Schools and Anganwadi centres. Frontline workers organised demonstrations of ORS preparation, along with counselling on feeding during diarrhoea and hygiene and sanitation.

Government policies are pretty good as Swachh Bharat Abhiyan ensures sanitation, Jal Shakti Ministry is aiming to provide safe drinking water to all households by 2024, so these are fantastic agenda and you can’t have a greater political will than that. However, with policies, there are gaps, there are challenges in implementation, there are mistakes that will be made along the way which happens and we need to figure out how to address them.

Ms. Muralidharan also hailed the efforts by the Ministry of Women and Child development for the Poshan Abhiyan, aimed at reducing low-birth weight, stunting and undernutrition, and anaemia among children, adolescent girls and women.

The nation-wide run Poshan Abhiyan also lists hygiene as one of its ten components and that is extremely helpful as well as required. However, we need to check how it is being rolled out and how hygiene is being promoted under this initiative. So government policies are certainly not a problem in our country as they exist but implementation is. We need to think of the last mile connectivity which are Anganwadi workers and ASHA workers as they are our connection to the rural community where awareness is an issue. We need to really empower these workers, she signs off.