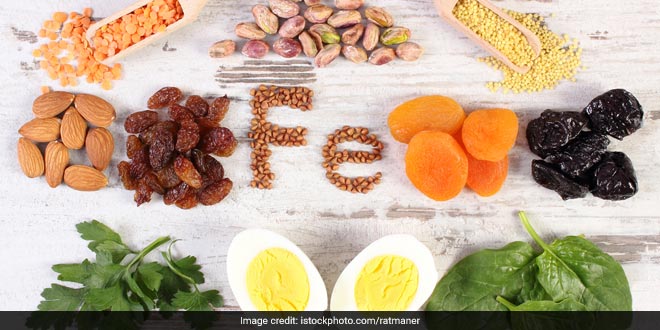 New Delhi: According to the fourth National Family Health Survey, in India, nearly 60 per cent of children under five years and 53 per cent women in the childbearing age have Anaemia, which is the highest in the world. Anaemia is a blood disorder in which the oxygen-carrying capacity is reduced due to low levels of haemoglobin (Hb) in the blood or low production of healthy red-blood cells (RBCs). The disorder makes people fatigued and experience loss of energy because of the lack of oxygen in the body. It is caused due to inadequate nutrition and deficiency of vital elements like Iron and Vitamin B12. As per experts, Iron deficiency caused anaemia is the most common form of anaemia. Various efforts are being made from the central and local governments to tackle the widely prevalent condition like celebrating a month-long nutrition campaign to combat anaemia as one of the goals and distributing supplements to mitigate the iron and other deficiencies among people from disadvantaged sections.

Here are five major takeaways on how to tackle anaemia:

Ms. Batra highlighted that women, especially in the child-bearing age group are more likely to suffer from anaemia due to heavy blood flow during menstruation or during delivery when the blood loss is high. She asserted that while in normal conditions, 21 milligram of iron is required, the iron need of a pregnant woman increases by more than 70 per cent and if this is not met, she may become anaemic which can have negative impact on the development of the foetus. The risk due to anaemia in pregnant women include pre-term labour and giving birth to a low weight child.

She further explained that even though anaemia is most prevalent among women, most of them are not even aware that they are suffering from anaemia. This, as per Ms. Batra, is because sometimes the symptoms can be subtle for some people. She said,

Anaemia comes in many forms and sometimes it may even go undiagnosed when the symptoms are not prominent. Like the person may feel fatigued or dizzy but that can be a symptom from so many other kinds of illness and disorders as well.

Food Over Supplements To Defeat Iron-Deficiency

Ms. Batra recommends that anaemia can be treated easily through food and supplements should be avoided. She said that sometimes supplements may not get absorbed in the body and the deficiency may remain intact if the treatment includes relying only on the tablets. She says,

Anaemia can be treated through diet and in India it is very easy to manage an iron-rich diet. It can be very affordable too. Foods like ‘rajgiri’ or ‘amaranth’ which are easily available, black chana, chikpeas, peanuts, dates, apricot, munakka and nuts like cashews among many others. Lentils are your go-to food if you are looking for iron-rich vegetarian diet.

She emphasises on increasing the intake of lentils for women and children suffering with high anaemia. She said,

Daal can be added in the diet in the form of a daal-cheela, daal-idli and daal-rice. Adding Amaranth flour with the wheat flour is also very helpful.

If a person is dealing with anaemia and needs to increase their HB levels then they must avoid excessive consumption of tea/coffee, says Ms. Batra. This is because caffeine present in these beverages can reduce the iron absorption capacity of the body. She suggests,

Whenever you are taking iron supplements or iron rich food, pair it with something citrus which is high in Vitamin C because it increases the absorption of iron. So you can either have with orange, lemonade, or gooseberry juice along with iron rich foods.

Aneamia Can Be Tackled By Regular Monitoring

While responding to a query from Facebook user who has been anaemic since birth, Ms. Batra recommended that people suffering from long-term anaemia must get their haemoglobin levels checked every three months along with Transferrin saturation to check Ferritin levels which evaluates the amount of iron stored in the body. Ferritin is a blood cell protein that contains iron. She says,

Based on the readings of the test, the patient can go to doctor or nutritionist to get guidance regarding diet and ways to up the Hb levels.

She says that for people with the extreme condition, monitoring Hb every three months is vital along with efforts to increase the Hb levels through food.

Interesting And Delicious Recipes Can Increase Iron Intake Among Children

Ms. Batra said that there is a high prevalence of anaemia among children and dealing this with food is difficult when the child is too picky when it comes to food. She recommends that innovative and delicious recipes can be created for children to make them consume more iron and Vitamin B 12. She says,

Rajgira Chikki is a very interesting recipe. Not only is it delicious but it is also packed with vital nutrients.

The super iron booster snack, ‘Rajgiri Chikki’, can be prepared by mixing amaranth, peanuts and jaggery, heating the mixture and making cookies out of this mixture. Apart from the ‘chikki’, pizza base can be made from the ‘rajgiri’ flour which can be topped with lots of vegetables and served as nutrition packed snack to children.

The Crisis Of Diarrhoea In India

Expert Speak: Importance Of First 1000 Days And Impact Of Mother’s Health On Child