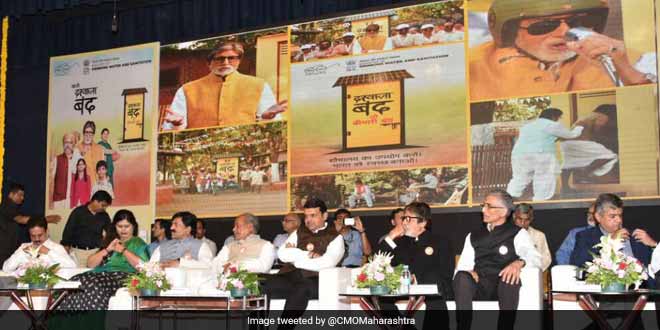 To bring a behavourial change with regard to toilet usage in rural areas of India, the government on May 30 launched an ‘aggressive’ campaign titled ‘Darwaza Band’ under the Swachh Bharat Mission. The campaign is produced by the Ministry of Drinking Water And Sanitation and is supported by the World Bank and aims to encourage behaviour change in men who have toilets but are not using them. Actor Amitabh Bachchan and Anushka Sharma have been roped in as campaign ambassadors to educate people about how open defecation leads to diseases.

The event was launched in Mumbai in presence of Amitabh Bachchan, Union Minister for Drinking Water and Sanitation, Narendra Singh Tomar, Chief Minister of Maharashtra Devendra Fadnavis, Secretary, Ministry of Drinking Water and Sanitation, Parameswaran Iyer, and other Centre and State dignitaries in Mumbai. Officials from Maharashtra’s districts and gram panchayats also attended the event.

Launching the campaign, Parameswaran Iyer said the campaign will aim to change people’s perception from ‘open defecation’ to ‘closed defecation’ especially for men. The goal of Swachh Bharat is not only to construct toilet but also increase toilet usage he said.

Mr Tomar said efforts at all levels are being made to make the Swachh Bharat a ‘Jan Andolan’ movement. He also congratulated Chief Minister Fadnavis for achieving 80% ODF in the state.

Assuring his fans and audiences of his support to cause of swachhta, Mr Bachchan gave a brief background to the development of the campaign and mentioned that the campaign talks about a safe space for people to defecate.

Ahead of the event, Chief Minister Fadnavis reviewed the implementation of Swachh Bharat Mission (Gramin) programme in Maharashtra and said the state is committed to become ODF by March 2018. State champions working towards improving cleanliness levels in the state were awarded. An exhibition displaying various toilet technologies was also put up.