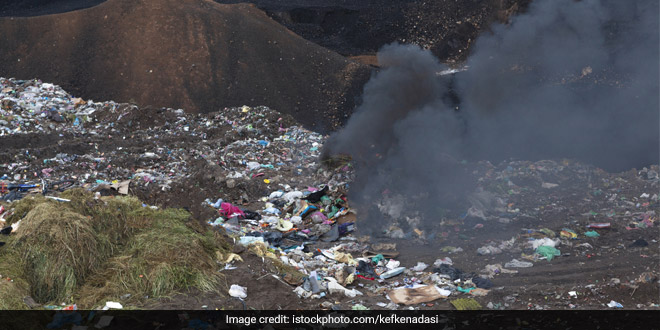 New Delhi: The 40-acre wide area of Delhi’s biggest garbage dump– Bhalswa landfill caught fire on Sunday, October 21 at 7:30 in the evening and even though firefighting continues, constant combustion and toxic fumes have made the National Capital’s air quality dip to ‘Very Poor’ level barely two days after staying at ‘poor’ level. The overall Air Quality Index (AQI) of National Capital Region of Delhi recorded by Central Pollution Control Board (CPCB) on Thursday at 12 PM was 332, as opposed to less than 100 prescribed by National Ambient Air Quality Standards of CPCB. Prolonged exposure to such deteriorating air quality levels pose a threat of Respiratory illness among people.

Delhi has already been suffering due to a high level of pollution from stubble burning, vehicular pollution and crackers bursting during Dussehra festivities but the air quality had shown signs of improvement on Monday as it moved from ‘very poor’ after Dussehra to ‘poor’ category with AQI 272 and improved further to 254 on Tuesday with Particulate Matter or PM 2.5 and PM 10 being the prominent pollutants. After two days of constant burning of garbage at Bhalswa landfill releasing toxic fumes, the AQI worsened to 328 on Wednesday. The experts say that the AQI will further deteriorate in the coming days with Diwali right around the corner.

The Air Quality Monitoring Station at Mundaka that monitors the concentration criteria of air pollutants [Sulphur dioxide (SO2), Nitrogen dioxide (NO2), Ozone (O3), Carbon monoxide (CO), PM2.5 and PM10 particulate matter] at various time instances of the day has already recorded a ‘severe’ AQI of 434 on Thursday which is the highest in National Capital Region followed by CRRI Mathura Road with AQI 399 and Anand Vihar that recorded AQI of 393.

Delhi is home to three major landfills, Bhalswa, Ghazipur and Okhla, and all kinds of waste that is wet, dry and toxic is collected together and dumped at these landfills. Experts say that the toxic methane gas IS formed due to rotting and decomposing of the waste is highly inflammable and can cause fires in landfills. This is not the first time, Bhalswa landfill has caught fire. Last year in November a similar incident had happened due to the production of methane gas.

A senior official of CPCB told NDTV, “We have already directed North Delhi Municipal Corporation to tackle the fire and its aftermath and also to take measures for segregating waste at the source itself”. He further said that managing waste is the need of the hour, so that landfills like Bhalswa that have reached its saturation point back in 2009 and has more than 80 lakh metric tonnes of waste, will not be further burdened to become a fire and health hazard.

Supreme Court Bans Bharat Stage-IV Vehicles To Be Sold Or Registered Across The Country From April 1, 2020