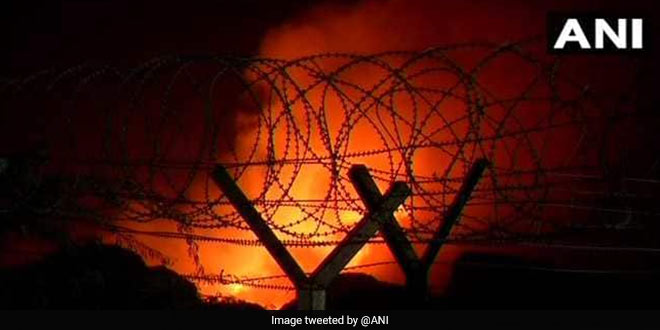 New Delhi: Until Sunday (October 21) evening, the national capital Delhi, was dealing with air pollution due to stubble burning, dust, vehicular pollution, but then the city had another add on to deal with, fire at Delhi’s biggest garbage dump– Bhalswa landfill. On Sunday, at 7:30 in the evening, the 40-acre wide landfill caught fire and it went on through the night. The issue was not just burning of the garbage, but toxic fumes and combustion that continued even after the fire stopped. The aftermath was clearly seen on Monday morning when Delhi featured in 9 of the top 10 most polluted areas across the country.

Talking about the reason behind fire at the Bhalswa landfill, Chitra Mukherjee, Head of Programmes, Operations, Chintan, says,

Delhi is home to three major landfills – Bhalswa, Ghazipur and Okhla. All three are past saturation date which means we should not be dumping waste there, anymore. Currently, we are using landfills as the waste management option. All kinds of waste that is wet, dry and toxic is collected together and dumped at a landfill. Once wet waste starts rotting and decomposing then you have formation of methane gas which is a very toxic greenhouse gas and greenhouse gases are responsible for climate change, global warming. Besides, being very toxic, methane is also very flammable so the incident was obvious.

Jai Dhar Gupta, environmentalist, who shared the news of fire with everyone, is of the opinion that there is lack of an emergency response mechanism. Millions of people live around the landfill and because of the mountain of garbage and regular cases of fire, residents are living a deadly life. Despite this no action was being taken.

It is almost like having active volcano in the heart for the city, says Jai Dhar Gupta.

Talking about the solution to the recurring problem, Ms Chitra says,

The solution is that you do not look at centralised disposal system rather look at decentralised models. 50 per cent of the waste generated is wet waste which can be used in the process of bio-mechanisation and composting can be done locally like at ward level, colony level. Residents should be incentivised to adopt composting. 25 per cent of the waste is dry waste which can be given to waste pickers who can then sell it to recyclers. The remaining non-recyclable waste can be taken to the landfill. Also, producers need to be made accountable. The solution is not to take all kinds of waste and dump at a landfill site.

This is not the first time, Bhalswa landfill has caught fire. Last year in November a similar incident happened and the reason was same, production of methane gas.

The Bhalswa landfill located near Mukarba Chowk at Bhalswa, G. T. Karnal road has been operational since 1994 and reached its saturation point back in 2009. Despite this, 2000 tonnes of waste is dumped at the landfill daily. Because of this dumping, today, the mountain of garbage stands at 62 meters from the ground, giving tough competition to 73 meter tall Qutub Minar. Till today, 80 lakh metric tons of waste has been accumulated at this site.

It is because of the non-availability of an alternative land.