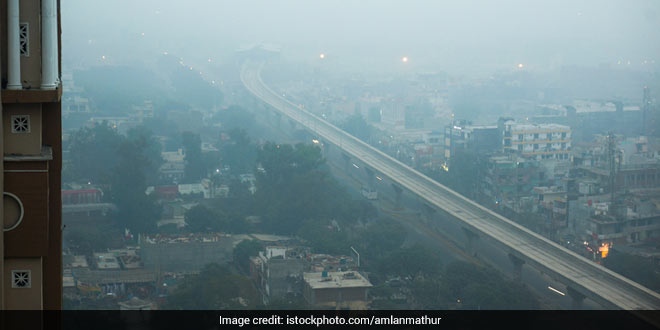 New Delhi: Following the action after being nudged by the Supreme Court to curb the rising air pollution in the national capital, Delhi’s air quality on Monday (November 15) witnessed marginal improvement as the air quality in the capital city reached the lower end of ‘very poor’ category with Air Quality Index (AQI) at 318 (overall), according to the System of Air Quality and Weather Forecasting And Research (SAFAR). The pollution level in the National Capital Region (NCR), especially Noida and Gurugram, have also shown slight improvement.

As per SAFAR’s bulletin, the AQI is likely to improve by tomorrow “as winds at transport level are slowing down resulting in lesser intrusion of farm fires related pollutants into Delhi.”

However, according to SAFAR, calm local winds reduce the dispersion of pollutants, the net effect of which is likely to make air quality remain very poor category. The effective farm fire count for yesterday was 3445, contributing to 12 per cent of Delhi’s PM2.5.

Implementation of lockdown for the two days with restrictions in anthropogenic activity emitting pollutants, air quality may improve a little but likely to remain in the very poor category if stubble burning share does not increase, SAFAR’s bulletin read.

The agency further said that the AQI is likely to deteriorate from November 16 night onwards due to calm wind conditions, as predicted.

On November 17, it is likely to be in the upper end of very poor category, they added.

The mercury in the capital city has dropped to 11.8 degrees Celcius on Sunday, India Meteorological Department (IMD) said. Owing to high levels of air pollution, schools in Delhi and Haryana have been closed. All construction activities have also been shut down.