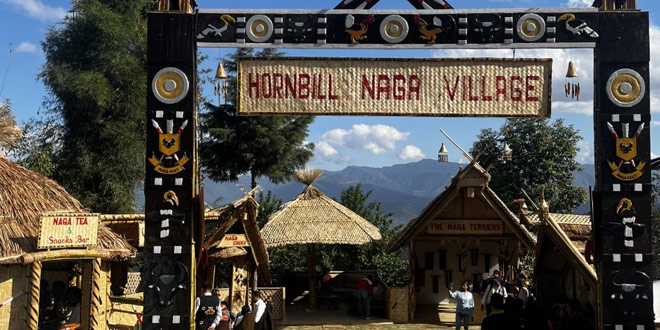 New Delhi: From folk dances to melodious songs, Nagaland hosted its iconic Hornbill Festival 202, which commenced on December 1 and ended on December 10 at the Naga Heritage Village Kisama, Kohima. The festival exposed visitors to the entire Naga culture, which was showcased in full splendor. However, there was an addition to this year’s festival-health. Durex, with its youth and adolescent-focused initiative, The Birds and Bees Talk (TBBT) programme assisted the 23rd edition of the iconic festival.

Spirits, fertility, social bonding and purification are the key elements that form the essence of the Naga festivals – the custom that each tribe follows, translates into a festival.

The ten-day ‘festival of festivals’ holds great significance as India plans to showcase the Hornbill Festival to the G-20. This comes in light of Prime Minister Narendra Modi’s recommendation of displaying India’s rich heritage and culture that lies in the rural parts of the country, besides in the urban cities.

The chief guest for the first day of the festival (December 1) was Vice President Jagdeep Dhankar, He inaugurated the event in the presence of Jagdish Mukhi, Governor of Nagaland, festival hosts Neiphiu Rao, Chief Minister of Nagaland, and H. Khehovi Yeputhomi, Advisor to Tourism, Art, and Culture.

“Nagaland People Made The The Birds and Bees Talk Initiative A Success”: Ravi Bhatnagar

Ravi Bhatnagar, Director, External Affairs and Partnerships, SOA, Reckitt was the chief guest and the keynote speaker for the second day of the festival (December 2). He said Nagaland had pioneered its approach in addressing discrimination and eradicating the stigma related to HIV/AIDS that marginalised people suffer. He also lauded the support of the citizens for The Birds and Bees Talk (TBBT) initiative.

The support of the people of Nagaland for the initiative indicates a deep understanding of sexual diversity and acceptance.

The TBBT exhibit at the Hornbill Festival offered ‘fly with VR’, ‘photobooth’ and ‘run to learn’. Fly with VR was to explore the beauty of Kohima, Nagaland with a flight simulator and ‘Run to Learn’ was a marathon that helped participants learn about Inclusion, Awareness, Consent, Equity and Protection.

Also Read: Durex The Birds And Bees Talk Programme Brings A Lesson On Health At The Hornbill Festival

Gaurav Jain, Senior Vice President, South Asia, Reckitt, said that the Northeast region was an important region to make a significant difference to the health of the country. He further said,

Reckitt aims to protect, heal, and nurture in the relentless pursuit of creating a cleaner and healthier world. Reckitt’s economic and social impact initiatives contribute to 13 of the UN’s Sustainable Development Goals (SDGs) to help people in India lead healthier and more hygienic lives. Our collaboration with the prestigious Hornbill Festival is our way of ensuring that our vision of One Health, One Planet, One Future is taken forward by the young adults and youth in the Northeast.

“The Birds and Bees Talk Is Raising A Conscious Youth”: Temjen Imna Along, Minister of Higher Education and Tribal Affairs, Government of Nagaland

Mr. Along said that The Birds and Bees Talk (TBBT) initiative was playing a significant role in raising conscious and mindful youth in the northeast regions. He said that Nagaland was proud to host its 23rd edition of the festival with TBBT as a health partner.

Together we stand strong for the youth of Nagaland by making their future healthier and happier.

The programme always introduces innovative and fun ways to connect with the youth and community as well. Partnering Hornbill as the purposeful health partner is a great way to spread the right knowledge and information, he added.

Mr. Metha said that the motive of the Hornbill festival was to spread the message of unity in diversity in the country, and The Birds and Bees Talk (TBBT) adhered to the vision and brought people together from all over the region.

TBBT talks about core values like consent, equity, protection, inclusion, and awareness among adolescents. And this year, TBBT being a part of the grand festival as a purpose partner is a needed intervention.

The continuous inputs from the system welcomed and boosted our efforts and gave us a nudge to perform better and affect millions of youth’s lives for their overall development, he added.

The Hornbill festival hosted guests from across states and nations, representing the rich culture of various tribes of Nagaland, and with The Birds And Bees Talk as a health partner, the partnership reached out to the people of Nagaland, ensuring to make the youth and future of India healthier and happier.

About The Birds and Bees Talk Initiative

The programme led by Reckitt and implemented by PLAN India, works towards the growth and life skills of adolescents. Reckitt announced the initiative in June 2019 with the goal of empowering and educating youth about sexual health, sexual risk behavior, gender equality, and diversity. The initiative targeted four million youth across six North Eastern states – Arunachal Pradesh, Manipur, Meghalaya, Mizoram, Nagaland and Sikkim. A Memorandum of Understanding (MoU) was also signed with state governments.