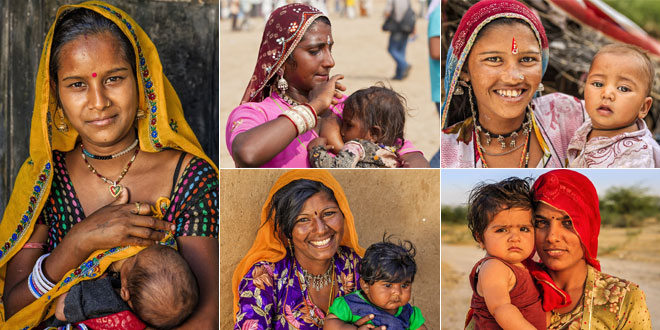 Surguju district in Chhattisgarh was not always a champion. Like most of the Indian village communities, this district too had traditional beliefs attached to breastfeeding and had no idea why breastfeeding is the most important thing a mother can do for her child. Not many women here understood the importance of breastfeeding children within an hour of birth, most of the children here were given water, sugar drinks, animal milk and what not. As a result, breastfeeding rates here as well were very low like the rest of the country because of myths and women not being very educated about the practice.

Also Read: Importance Of Breastfeeding For Both Mother And Child

But in 2002, two years after Chhattisgarh came into being, the state kick-started an initiative with which breastfeeding started to become a healthy practice in each of the household in the Surguju district. Ms Singh added,

Chhattisgarh was facing some of the biggest healthcare challenges back in 2002. At that time, our infant mortality rate was as high as 73 per 1000 live births. This depressed state gave outcome to one of India’s largest community health volunteer programme – Mitanin, which means a female friend. They are basically trained healthcare women who started guiding other women about the good practices during pregnancy, the dos and don’ts and why the women should initiate breastfeeding within the first hour of the birth.

Breastfeeding was not being practised because women of the district were not aware on its importance. Most of the time, the women were forced to practice certain rituals guided by their in-laws after pregnancy. The motto of Mitanin programme was to simply deal with all these myths and make breastfeeding a part of each and every mother after pregnancy and not just the new mother but also her family.

The trained healthcare ‘women friend’ as part of the initiative started visiting each and every household in the district and with communication as the tool, these women friend started guiding the pregnant women about the healthy practices during and after the pregnancy, including the dos and don’ts of breastfeeding. Currently, in the whole state of Chhattisgarh there are around 70,000 trained Mitanin who are working on a regular basis in the state and go door-to-door as per the schedule to talk to women and their families about the healthy pregnancy and breastfeeding practices.

Earlier in Surguju and now across Chhattisgarh we are following this basic model of awareness, where Mitanin goes to a household before the women deliver the baby and then for the first 45 days of delivery with one motive in mind – ‘healthy pregnancy and childbirth’. This intense one-on-one communication and inter-personal counselling have started showing more and more results in the recent past.

Apart from the awareness programme, in Surguju, ‘104 network’ was established, which was basically a toll-free number for new mothers to ask anything about pregnancy and an assistant would help them out. Ms Singh added,

During our research in Surguju district, we found that many families were unaware of the basics of pregnancy. So we thought of introducing ‘104 network’, which provides women with a lot of important information for example nearby nursing home, dietary related information and about breastfeeding.

Also Read: Some Women Cannot Breastfeed Their Infants And It Is Okay, Explains This New Mom

NDTV also spoke with the ‘Nutrition Man’, Basanta Kumar Kar, who has been awarded the Nutrition Leadership Award 2019 recently. He was also the first Member Secretary of the State Advisory Body on Nutrition in Chhattisgarh in 2002. Explaining how Chhattisgarh’s Surguju got it right when it comes to breastfeeding, he said,

The problem of low breastfeeding rate was not in Surguju alone but across India. But Surguju identified it in an earlier stage and started to work towards it. Traditional beliefs, myths associated with breastfeeding and women not being aware of the healthy practice of breastfeeding are a few of the causes why Surguju suffered from low breastfeeding rates. But the district came out with different initiatives and brought a huge change. The right thing about the programme Mitanin and its success is because it is a community-based initiative. We have taken people from the community, have trained them and they are only going within the community to teach, counsel and motivate other people like them. So, there is a human connect, bond, which makes education an easy task. Moreover, as the main beneficiaries of this innovation were children and mothers living in rural habitations, the programme focused mostly on training women warriors.

Also Read: How Superstitions Act As A Barrier For Women To Breastfeed

Mr Kar was also party to the introduction of some the innovative concepts in the district at that time. One of them is the concept of “dharam dai,” or lactating foster mothers in Surguju. The concept of ‘dharam dais’ was voluntarily feeding community children.

Mr Kar added, “In rural areas most of the time pregnant women cannot sit at home and look after her baby for the crucial one year. They tend to go to work and as a result, the practice of breastfeeding is broken in between. To bridge this gap, I thought of introducing the concept of ‘dharam dais’, wherein a child can be voluntarily breastfed by other women.”

In addition, he also introduced the idea of ‘Bahu, saas, pati sammelan’ in the district, where each and every member of a family – daughter in law, mother in law and husband got together to discuss, share experiences and learn about breastfeeding among their community.

In 2012, Surguju introduced another community-led programme called Fulwaris. Under this initiative, mothers in a village started running community creches for children under the age of three years, known as Fulwari. Here three hot meals a day for children and two hot meals per day for pregnant women along with care and attention for about seven hours for children are being provided. The implementation and technical support for the initiative were given by the State Health Resource Centre (SHRC). Each Fulwari started running from a space given by the volunteer and got a grant of around Rs 4000 for utensils, bed nets, toys.

Mr Kar signs off by saying,

What we did in Surguju was very simple, we initiated many easy community-based programmes and made breastfeeding a topic of discussion. We taught women how breastfeeding was done in the right manner, why it was important and not just women but their entire family so that they are not forced to practice old traditional myths related to breastfeeding. We involved women warriors for this crucial subject and made sure they educate each and everyone in the district so that a change can be implemented. I think India needs to learn and adopt from a few of these techniques and replicate across the country.