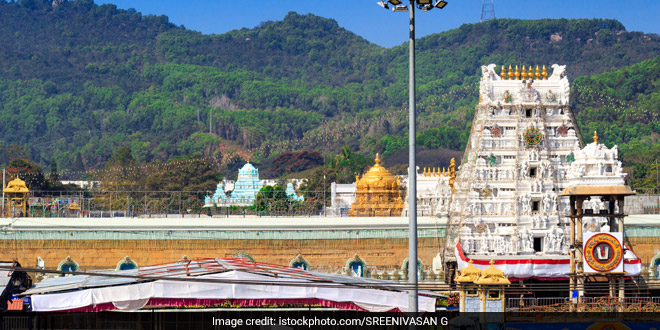 Mumbai: India has more than 2 million temples and millions of devotees visit these temples every day. From offering flowers, fruits and other gift items to receiving the holy prasad, tonnes of plastic wrappers or bags are used daily that end up either at landfills or in water bodies, eventually polluting the environment. To reduce the overall plastic menace, famous shrine of Andhra Pradesh Tirupati Balaji Temple has come forward and decided to ban plastic items inside its premises from November 1 this year. The plastic ban was recently announced by Tirumala Tirupati Devasthanams (TTD), a management committee in charge of the shrine that is located on the hill of Tirumala town.

The plastic ban will be strictly implemented in Tirumala Shrine from November 1 onwards, a month after plastic was banned in the city of Tirupati. Since Tirumala falls in the same arena, we wanted to observe the same in the temple also. Awareness drives will be conducted throughout the next one week. We have directed the Estate Officer and Health Officer to conduct meetings with hoteliers, shop keepers, vendors for their cooperation as well, said Tirumala Joint Executive Officer (JEO) Mr KS Sreenivasa Raju in a review meeting with senior officers of Tirumala in Annamayya Bhavan on Tuesday.

Mr Raju said that packaging of the ‘laddus’, a famous prasad given by the temple authorities, will not be disrupted as the thickness of the plastic wrapping used is more than 50 microns, however the authorities will explore eco-friendly alternatives.

We are allowing the use of plastic bags to pack the prasads but if there are any viable alternatives readily available in the market then we will make a switch. We have already started to dispense with the usage of plastic carry bags in the temple. As for the fines for violation of the rule, we are yet to fix them, added Mr Raju.

To implement the ban, Municipal Corporation of Tirupati (MCT) will help the TTD authorities. The municipal corporation, which is currently carrying out awareness drives on plastic ban in the city, will also help the vendors around the temple in finding cost-effective plastic bag alternatives.

After the Tirupati Balaji temple was nominated in 2016 as one of the Swachh Iconic Places (SIP), the TTD has made sanitation and cleanliness a priority. The SIP is an initiative under the Swachh Bharat Mission that focuses on the cleanliness of selected iconic heritage, spiritual and religious places. The authorities have made the region around the temple open defecation free (ODF) and have gotten rid of all its open dumping spots making the town litter free. There are 200 blocks of public toilets in the town and all the latrines are regularly cleaned and maintained well. More than 100 bins of red (for dry waste) and green colour (for wet waste) are placed in the region.

As for the daily generation of 90 tonnes of waste inside the temples, it gets treated through aerobic composting. All the wet garbage is converted into manure and is used in the gardens. The water in the holy pond also gets treated everyday in the three tertiary water treatment plants and after it is recycled it is used to water the plants.

Air Pollution In South Delhi: 20 Teams To Patrol 24×7 To Stop Instances Of Leaves And Waste Burning