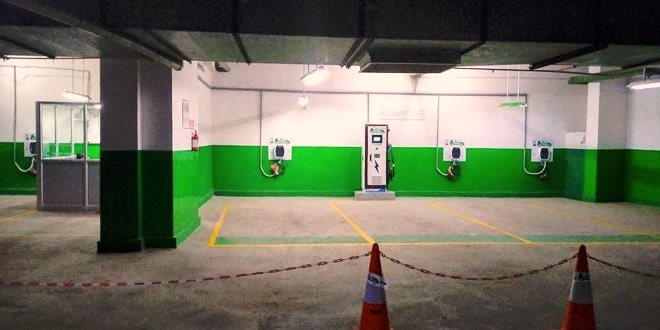 New Delhi: Electric vehicle (EV) owners can now charge their vehicles for a minimal amount while shopping or watching movies or dining in the Cross River Mall near Karkardooma metro station in New Delhi. The mall has recently installed a public electric vehicle charging station for the convenience of electric car owners and for encouraging adoption of EVs among its visitors. Located in the parking area, the charging station has five chargers including a supercharger which has the capacity to charge an electric car completely in 90 minutes and four slow chargers that take six hours to charge a car. The charging station has been installed by a private company EVPlugin Charge.

The advantage of the facility can be taken by using the mobile application of EVPlugin Charge which is available on Google Play. Through the app, you can book a time slot for using a charger according to your convenience between 10 AM and 8 PM and let your vehicles charge while you have a good time at the mall.

Mr. Singh further said that the chargers have been installed to address the charging needs of visitors with electric cars and not electric scooters. He said,

Electric scooters do not need high capacity chargers. These can be charged using a simple five-ampere socket easlily available at home. However, for electric cars, a charger with high electric capacity is required.

Talking about the fee for using the chargers, Amit Khosla, CEO of EVPlugin Charge said,

For the supercharger, a user needs to pay Rs. 2.5 per minute, and for other chargers the fee is Rs. 50 per hour.

One of the bays in the parking areas of the mall has been reserved for electric vehicles and no conventional cars are allowed to be parked here. To make it easy to spot, this bay has been painted in green and white.

Charging stations play a significant role in building an ecosystem for electric vehicles in India which aims for having 30 per cent vehicles on road as electric by 2030 to combat the rising vehicular pollution in cities. For this, the central, as well as an increasing number of state governments, have been actively advocating the adoption of electric vehicles in the country.

Earlier this month, the Indian government notified the implementation of ‘Faster Adoption and Manufacturing of Electric Vehicles in India Phase II (FAME India Phase II)’ with a total budget outlay of Rs. 10,000 crore. The program is aimed at promoting electric mobility in the country. Under this scheme, the government is aiming to install as many as 2700 charging stations across the country.

In March, ramping up its efforts to curb the deteriorating air quality in the national capital, the Delhi government and the Ministry of Power approved a plan for installing 131 EV charging stations across Delhi in the next three months. Apart from this, New Delhi Municipal Council (NDMC) also installed 25 public charging stations for EVs for the promotion of electric mobility.