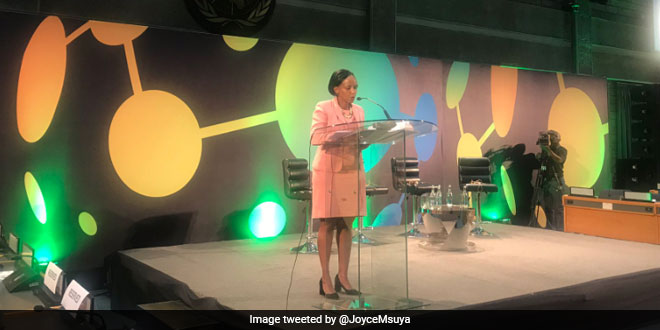 Nairobi: It’s encouraging to see innovation, a key to tackling pollution, coming from all corners, especially developing countries like India, United Nations Environment acting Executive Director Joyce Msuya has said. This is innovation in many forms, not just gleaming new technology like electric vehicles. Social innovation is important, like citizen-led movements to clean up pollution such as that led by Afroz Shah, who is engaged in one of the world’s largest beach cleaning operations in Mumbai. Ms. Msuya told IANS in an interview in run-up to the Fourth UN Environment Assembly here March 11-15,

Policy innovation is important as well, and we have seen India excel here, not least with a major announcement to ban single-use plastics by 2022.

Negotiations at the annual assembly are expected to tackle critical issues such as stopping food waste, promoting the decarbonisation of economies, tackling the crisis of plastic pollution in oceans, among many other pressing challenges.

Ms. Msuya, a Tanzanian microbiologist and environmental scientist, believes everyone can contribute to solutions to pollution.

Policy directions from the government, like India’s single-use plastic ban, help set the tone for businesses and encourages them to develop sustainable solutions, she said.

At the same time, upward pressure from individuals changing their habits and civil society campaigns force businesses to provide the non-polluting products that consumers demand.

India’s announcement that it will eliminate all single-use plastic in the country by 2022 is a tremendous move by the government. This unprecedented action will reduce plastic waste from 1.3 billion people in the fastest growing economy in the world. India is setting the bar high with this bold announcement.

On World Environment Day on June 6, 2018, India pledged to eliminate all single-use plastic items like carry bags, straws and water bottles by 2022, the year coinciding with 75 years of the country’s independence.

The annual average per capita consumption of plastic in India is at 11 kg as against global average of 28 kg.

There is no one answer to environmental challenges like this, and we need a comprehensive approach. For example, the UN Environment recently announced a project with Japan that will identify sources of plastic pollution in the Ganga river. This is the first time such a survey will have ever been done, and the knowledge we gain will help us better understand the problem. We need to be working across all areas. Every technological, scientific social and policy innovation is a welcome addition to domestic and global efforts to beat plastic pollution.

On smog becoming an annual affair in New Delhi every winter, she said Indian cities, like a number of others around the world, are suffering from poor air quality. Ms. Msuya, who has visited and lived in cities chafing under the dark clouds of haze and smog, said,

This is a global public health emergency. Living in cities should not mean living fewer years, or losing cognitive capabilities, or reducing the quality of life of our children.

For her, there is no magic fix. A range of actions must be taken by individuals, city authorities and governments, and these should be based on science.

Air Pollution: What Action Should Be Taken And When, IIT-Delhi To Recommend Centre