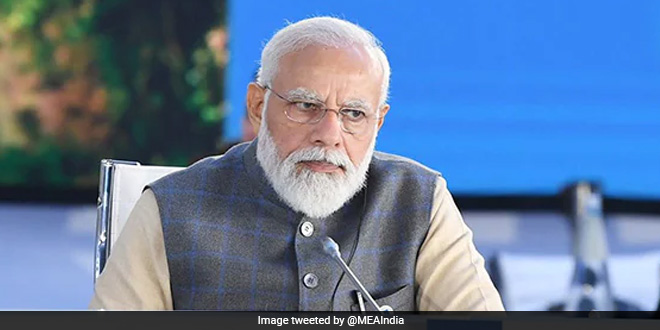 PM Modi at the G20 Summit Session on #ClimateChange in Rome

At the session, PM Modi also put out three actionable points before the G-20 partners:

a. The G20 countries create a ‘clean energy projects fund’ which can be used in countries where peaking has not happened yet

b. Create a network of clean-energy research institutions in G-20 countries

c. The G20 countries should form an organisation to create global standards in the field of green hydrogen, so that its production and use is encouraged.

PM Modi said, “India will also make its full contributions in all these efforts.”

He also asserted that India is moving ahead with ambitious goals of climate mitigation. He added,

When we announced our goals in Paris, many asked whether India would be able to do something like (creating) 175 GW of renewable energy. But India is not only rapidly achieving these goals but is also busy setting higher targets.

Highlighting the targets set by India for dealing with climate change crisis over the years, PM Modi said,

Going beyond its Paris commitments, India has set a target of 26 million hectares of wasteland rehabilitation. Indian Railways, the world’s largest passenger carrier serving an average of 8 billion passengers every year, has set a ‘Net Zero by 2030’ target. With this decision, the Indian Railways will mitigate 60 million tonnes of carbon emission per year.

He also added that India is working on the target of 20% ethanol blending in petrol by 2025.

On the other hand, highlighting that India’s commitment to protect the environment is not just limited to the energy debate, PM Modi said,

We have successfully increased the number of Asian lions, tigers, rhinos, and dolphins as well, which proves that our commitment to protecting the environment is not limited to the energy debate.

At the session, PM Modi also highlighted that due to the efforts made in the past few years, today India is one of the top five countries in the world in terms of renewable energy capacity and noted that the world also recognises this success of India.

In his address at another session on sustainable development, PM Modi said that due to the coronavirus pandemic, the pace of achievement of the Sustainable Development Goals in the world has slowed down. He said,

It is essential that in post-COVID recovery, our major priority remains on the SDGs.

PM Modi further said that India has made many of its digital solutions open source and available to all of humanity. He added, “We would like to work with our G20 partners to take India’s experience to other developing countries.”

Noting that this is the first year of ‘Decade of Action’, PM Modi said, all have a shared responsibility that the benefits of global recovery reach all countries, and added that the role of G20 will be very important in this.

India’s Agenda At COP26: What You Need To Know