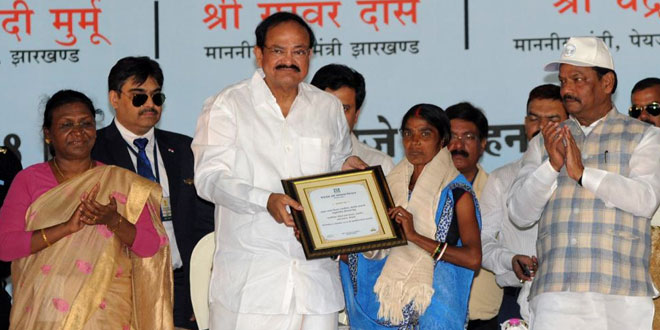 Mumbai: Five more districts of Jharkhand were declared open defecation free (ODF) on Thursday, taking the total tally of ODF districts in the state to 14 out of a total of 24. Vice-President M Venkaiah Naidu announced that five districts of Dhanbad, Khunti, Bokaro, Sahibganj and Purbi Singhbhum and 1,000 Gram Panchayats have attained 100 per cent toilet coverage. So now the total number of ODF villages goes up to 22,502 out of a total of 32,620. In the last four years over 32 lakh toilets have been constructed across Jharkhand increasing state’s overall sanitation coverage from a mere 16 per cent in 2014 to 96 per cent in 2018.

Right before the launch of Swachh Bharat Abhiyan, Prime Minister Narendra Modi had asked all the officials to ensure that the cleanliness mission turns into a people’s movement. As I spoke to the people of Lalkhatanga Panchayat, Ranchi and studied the journey of the newly turned five ODF districts, I can say that the mission has become a mass movement. People in Jharkhand are not only educating themselves about the mission but are also participating in the toilet building activity. I congratulate the people and officials of the state for their historic move of declaring five districts ODF in one day, the Vice-President said.

Chief Minister Raghubar Das who was also present at the event said Jharkhand’s commitment to swachhtawill be seen on October 2 this year when the entire state will be declared free from open defecation to mark Gandhi Jayanti and the fourth anniversary of Clean India Mission.

As soon as we had declared our state’s urban areas ODF last year on October 2, we started working towards giving toilet access to every individual residing in the rural areas of the state. As promised, we are nearing the target and on October 2 we will officially declare the entire state free from open defecation, the Chief Minister said.

In a bid to boost swachhta and awareness levels in the remotest areas of Jharkhand, all the village panchayats introduced a new initiative titled ‘Rani Mistry’ (Queen Maison) making women prime contributors. The new initiative helped the five districts in eliminating the practice of open defecation.

Self-Help Groups (SHGs) in all the villages were trained to construct toilets. Women from these groups formed ‘Rani Mistry’ in their respective villages and began constructing toilets. It gives me immense pleasure to announce that 14 lakh toilets were built by the 55,000 members of ‘Rani Mistry’. 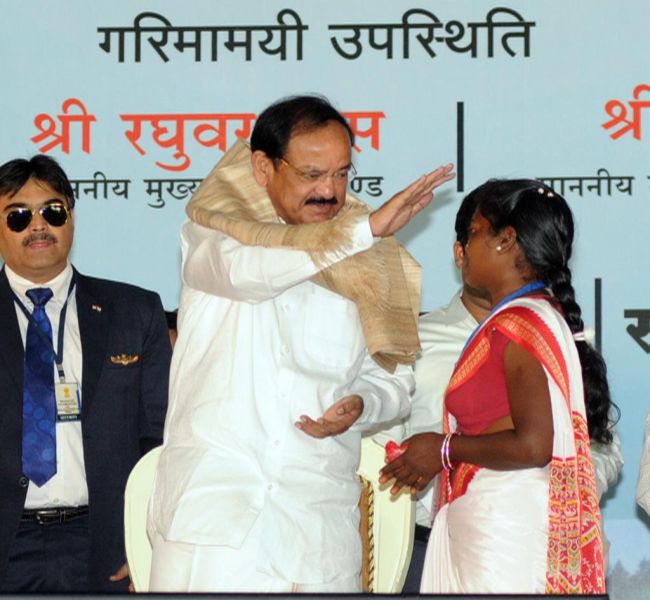 Since most of the members from the group belong to families who are conservative, the members had to overcome a lot of the challenges. Recalling her experience, Seeta, a trained mason who was felicitated at the event along with her fellow masons said,

First we got associated with SHG and got training to build toilets. There were times when masons wouldn’t turn up and thus the process became slow. Filling their shoes, we started to construct toilets despite our families resisting it. Without getting discouraged we continued our efforts and I feel proud to have constructed 148 toilets on my own.

Referring to a study done by the Asian Development Research Institute (AADRI) in Jharkhand, the Vice President said,

Awareness and insistence towards community and personal cleanliness has increased in the women’s groups. Women have become aware of their families in the purity also. In the last years, cases of diarrhea decreased by 23% and anemia has been reduced by 10%. These findings are hopeful for the future.

Once the rural areas go ODF on October 2, the state will shift its focus from the process of ODF to ODF Plus said the Chief Minister.

From October 2 to January 30, a massive awareness programme will be launched to sustain the ODF tag. In addition to that, the officials will start working towards providing adequate water supply in all ODF villages. Houses that do not have pipeline connection will be provided with the same.  The work to provide water connections begins from today, he said.

The Chief Minister made an appeal to the citizens to make Jharkhand a clean and healthy state by 2019.