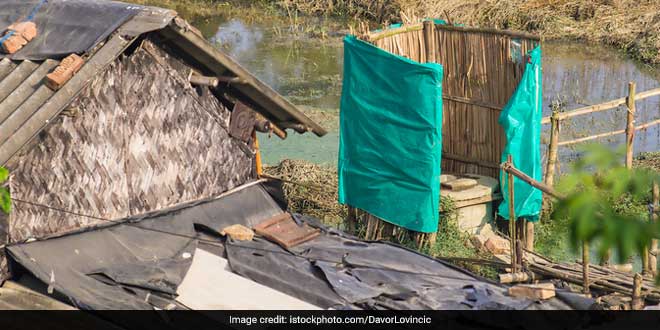 New Delhi: Though only eight of the total 24 districts in Jharkhand have been declared open defecation free so far, but the government is still hopeful of making the state ODF by October 2, 2018. To ensure that the remaining districts become ODF, the state government is now heavily focusing on fixing the huge number of dysfunctional toilets, over 3 lakh in total. But how did some many toilets become dysfunctional in the first place? The state government as part of the Total Sanitation Campaign (launched in Jharkhand in 2002-03) achieved 44 percent sanitation coverage by 2010, but according to the Census 2011 data, only about 8 percent of the households in the state had access to functional toilets. This implies a gap of 36 percent (roughly 3,38,323 toilets), which was a result of households resorting back to open defecation after being provided a toilet unit under the Total Sanitation Campaign.

Lakhs of toilets were built earlier as a part of the Total Sanitation Campaign (TSC). In such toilets, structures were made up of local materials such as clothes, bamboo, tin sheets, etc. Over the time, many of them were either dismantled or ceased to exist in many households. Now, we are focusing on fixing these existing toilets which are no longer in working condition, Rajesh Kumar Sharma, Director, Swachh Bharat Mission, Jharkhand, informed NDTV.

To address this issue, the Swachh Bharat Mission officials across all the districts are in the process of verification of such toilets.

Sanitation is now being prioritised amongst the overall development agenda. The government has taken a decision to utilise all centrally sponsored schemes to make villages ODF. A number of development schemes are being converged with the sanitation initiatives. The funds from District Mineral Foundation Trust (DMFT), Mahatma Gandhi National Rural Employment Guarantee Act (MGNREGA), MLA Development Fund, Corporate Social Responsibility (CSR) or State fund are now being utilised to make the state ODF by October 2, 2018, Mr Sharma further added.

The Dumka district has the highest number of villages with dysfunctional toilets… roughly around 1237. In this district, there were over 60,683 beneficiaries with dysfunctional toilets before the baseline survey was done in 2012. So far, we have managed to convert over 7,036 toilets functional, while the working is underway in full swing to make the remaining 53,647 functional as well. Overall, we have made over 1,16,664 toilets functional across the state, said one of the officials of the Swachh Bharat Mission.

Talking about the repair of the dysfunctional toilets, the state’s Swachh Bharat Mission Director said, “There are a very few families across the state which are repairing the toilets on their own. However, all of the districts are working to identify capable families who have dysfunctional toilets and they are being motivated not just for self-construction or repair of their toilets but also to use them throughout and end the menace of open defecation.”

The state also got a pool of over 1 lakh trained masons (both male and female) to construct twin pit toilets. And during the ongoing Swachhta Sahyog Abhiyan, the Rani Mistris (women mason), Raj Mistris (male mason), Jal Sahiyas (women who supervise hand pump repair and cleanliness of water bodies) and Swachhagrahis (Swachh Motivators) from ODF districts are visiting other parts of the state to build toilets and create awareness about cleanliness, Mr Sharma further added.

And to ensure behavioural change, the authorities are organising Swachhta Sabhas (Sanitation Meetings) on the second of every month across all the villages in the state, wherein all the Swachh officials and villagers sit together and discuss the action plan to make the village ODF. And on 19th of every month, they organise sanitation related class across the villages to ensure that people are aware of the hazards of open defecation.

In terms of sanitation in urban areas, Jharkhand was declared India’s best performing state in the Swachh Survekshan 2018 as all of the 11 cities in the state are open defecation free (declared ODF on October 2, 2017), thanks to a comprehensive public toilet improvement scheme which was undertaken in the state in 2016. Now, all the cities have public toilets every one kilometre, all ODF cities have received certification from the Quality Council of India (QCI).

Before the launch of Swachh Bharat Abhiyan in 2014, the status of sanitation in Jharkhand was very dismal, with only about 18 percent households having access to toilets in the rural areas and the rest defecating in the open. But with the state government’s swachhta related efforts in rural areas, the sanitation status has improved and now stands at 79.63 percent with the construction of over 26 lakh (26,39,266) household toilets. Over 13 thousand villages and around 2,000 panchayats have become open defecation free (ODF). In the coming few months, to meet the October 2, 2018 deadline, the state government has recruited over a lakh masons to accelerate the toilet construction activities in the state and is hopeful to achieve 100 percent sanitation coverage by then.

Say No To Plastic: “We Are All A Part Of Nature And Not Apart From Nature”, Says Actor Dia Mirza At IIFA, Bangkok

Ahead Of Maharashtra Plastic Ban, Government Passes A Mandate For Using Plastic Waste To Lay Roads