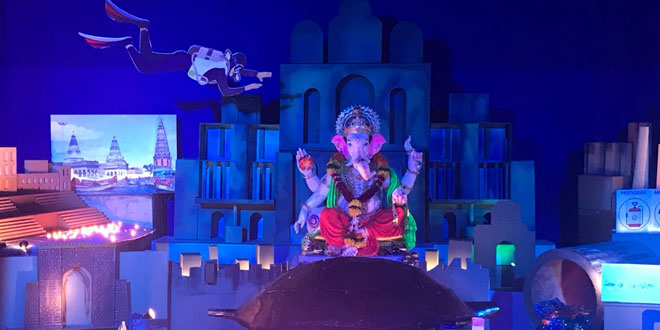 Mumbai: ‘Close to thousand turtles die each year after being tangled up in fishing nets, nylon fishing line, cans, plastic packaging, plastic bottles and so on. Are we heading for an apocalypse for marine animals?’ warned a voice as the red light shifted from discarded plastic items onto the cardboard turtle that was trapped in a fishing net. This was one of the unfortunate realities of our littered oceans depicted in a Ganapati pandal in Thane. Like every year, the Shreerang Sahaniwas Ganeshotsav Mandal chose a theme that is affecting people globally. With ‘Plastic Pollution’ as its theme, the 48-year-old Mandal designed the pandal in a way that makes people aware about the deplorable conditions of the water bodies. 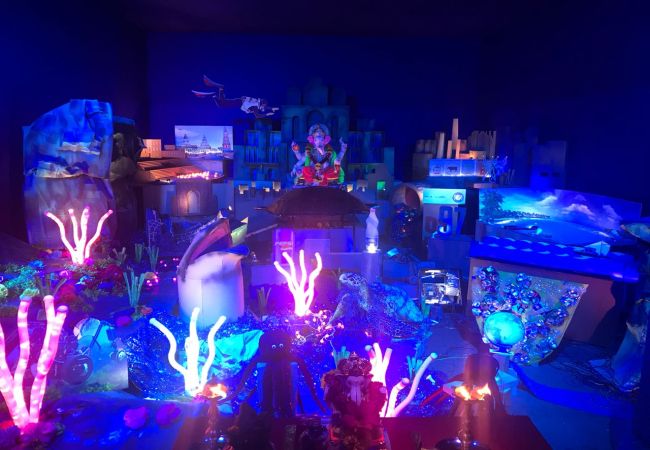 Each year we analyse the social and environmental problems that exists right in front our eyes, but we don’t pay much heed to. As we were studying the issues this year, news of the Arabian sea vomiting tonnes of garbage onto Marine Drive broke. And two months later, the devastating Kerala floods took place that left piles of garbage on the roads as the water percolated back into the water bodies. The very next week, our team began working on depicting marine pollution in a creative way, Pramod Sawant, President of the Mandal tells NDTV.

Around 8-10 men worked round the clock for 20 days to plan and execute the idea. With limited budget and time, the task seemed challenging but not impossible. The team approached professors and prepared an eight-and-a-half-minute audio to educate the devotees about the plastic menace. While school children from Shreerang Vidyalaya helped the craftsmen in colouring the backgrounds and planks, housewives in Thane came forward to make multiple sea props. The props included marine animals, underwater plants, the famous Juhu beach of Mumbai, Ganga Ghat in Varanasi, industries, different types of marine litter and so on. To promote the idea of ‘reduce, reuse and recycle’, the Mandal reused the wooden planks used last year. It also purchased discarded plastic bottles and other scrap materials from local scrap dealers.

The idea to promote ‘reduce, reuse and recycle’ was used

Right from decorations items to the Ganapati idol, everything was eco-friendly and free from non-biodegradable items that take years to decompose.

For the last 48 years, we have been using Ganapati idols that are made from clay and about six years ago we stopped using thermocol and plastic materials to decorate the pandals. It is high time we monitor our reckless dumping and improper waste management. We are happy that we can send a message to large number of people in a creative way, adds Mr Sawant who claims that the footfall in the pandal is around 4,000 people per day.

Besides the plastic litter, impact of other kinds of waste including household sewage, effluents from oil refineries, industrial and electronic waste was also highlighted in the presentation. Mumbai’s prime issue when it comes to littering was showcased though the beaches. A small model of the beach and plastic cutleries discarded by the tourists and locals and sewage directly entering the beach was created. Further talking about the mighty Ganga river, the presentation pointed out the irony of how despite worshiping the holy river, people don’t hesitate to pollute it.

While plastic waste is dominating world oceans, we are not far behind the day when other kinds of waste like electronic items are spotted in the water bodies, adds Mr Sawant.

As the presentation nears the end, the voice in the audio speaks about one of India’s favourite festivals – Ganesh Chaturthi. It warns people about the damage idols made from Plaster of Paris and other chemical materials is causing every year.

You may think that the idol you immersed in the ocean will melt on its own without causing any damage. But remember it takes months perhaps years to decompose. And without giving any breather to the oceans, we immerse more idols as the festival arrives the next year. Is the celebration and devotion worth it if we are unable to protect our oceans and marine life? Take a two-minute of pause the next time you purchase an idol and imagine the harm it is causing to the environment, the voice fades away in the background as all the lights go off.

Also Read: This Ganesh Chaturthi, Bappa Is All Set To Take Away E-Waste Woes Of Pune Devotees