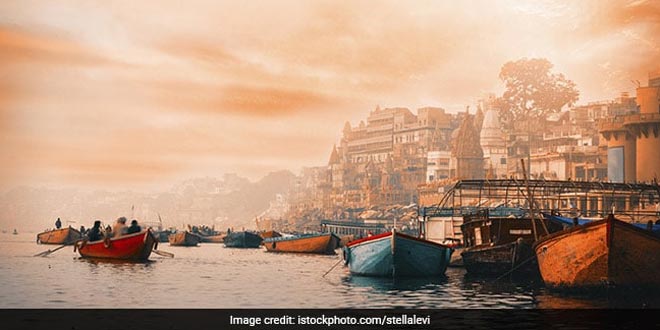 Varanasi: More than three decades after the Ganga Action Plan (GAP) was launched, the ancient city of Varanasi is set to have zero sewer discharge in the holy river by November this year. The GAP was launched by then Prime Minister Rajiv Gandhi in Varanasi on June 14, 1986, to reduce the pollution load on Ganga. Under Union Minister Nitin Gadkari, the Ministry of Ganga Rejuvenation and its implementing arm National Mission for Clean Ganga (NMCG) have taken up several projects for the treatment of sewer water in Varanasi, the parliamentary constituency of Prime Minister Narendra Modi. NMCG official said,

Work on 50 MLD sewage treatment plant at Ramana is nearing completion. By November this year, it is expected to be fully operational for treating discharge of Assi Nala. With this, the flow of untreated sewer water from Varanasi city into the Ganga will be completely checked.

The city currently generates about 300 million litres per day (MLD) sewer water. The existing treatment capacity has been boosted with the inauguration of 140 MLD sewage treatment plant (STP) at Deenapur last year by the prime minister. The existing gap of around 50 MLD will be filled with the operationalisation of Ramana STP, said officials of UP Jal Nigam, which is executing the project. Another 120 MLD treatment plant at Goitha is undergoing trials which will increase sewage treatment capacity to 412 MLD.

The sewage generation is expected to increase up to 400 MLD by 2035, said NMCG officials. Besides the STPs, other projects have also been taken up by the agencies to make the city future ready and ensure the pristine look of Ganga which serves as focal point in the eminence of Varanasi as a hub of international tourists. The efforts have started bearing fruits with people talking about cleanliness and improved condition of ghats along the Ganga river with more tourists now flocking them. “The ghats are cleaner and we are receiving more tourists now,” said Dilip, who rows his boat at Dashashwamedh Ghat on the Ganga.

Projects for regular cleaning of 84 ghats at the cost of Rs. 15 crore and river surface skimming to remove floating garbage, with Rs. 2.48 crore expenditure, have been operationalised in the city. The NMCG has sanctioned Rs. 11.73 crore for repair of 36 ghats which is expected to complete by June. A total of 13 projects worth Rs. 913 crore has been sanctioned for Varanasi under Namami Gange programme. Additionally, sewerage projects worth Rs. 703.14 crore have been taken under Jawaharlal Nehru National Urban Renewal Mission (JNNURM) and Atal Mission for Rejuvenation and Urban Transformation (AMRUT) schemes, officials said.

Kumbh Mela: Special Arrangements Made For Cleaning The Drains In Prayagraj