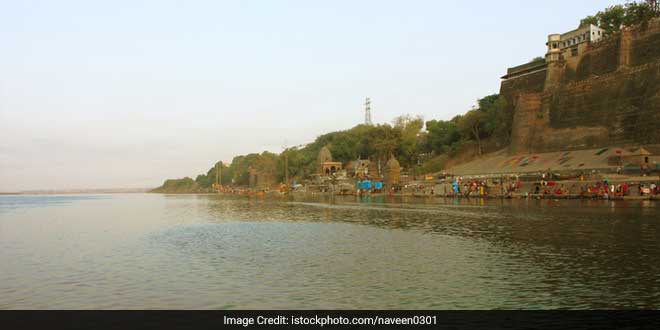 Mandla: Union Minister Rajnath Singh today suggested that the Madhya Pradesh government should bring a bill in the state assembly to give a living entity status to river Narmada. Responding to the suggestion, Madhya Pradesh Chief Minister Shivraj Singh Chouhan assured that his government would introduce a bill to that effect in the next session of the legislative assembly. Both the leaders were speaking at a function organised here on the occasion of the Narmada Seva Yatra that is underway in Madhya Pradesh.

“Bring a bill to give a living entity status to river Narmada,” Mr. Rajnath said.

The Supreme Court has already accepted rivers as living entities, he added.

The Union Home Minister said the Indian Constitution stands for protection and conservation of rivers.

Also Read: Toilets To Be Constructed On The Banks Of Narmada To End Open Defecation: Shivraj Singh Chouhan

According to him, Prime Minister Narendra Modi wants to protect and conserve rivers.

For this purpose, a budgetary allocation of Rs 20,000 crore has been made; he said adding, “Under this programme, shortage of money won’t come in the way of cleaning the rivers, especially the Ganga river.”

The Namami Gange programme was launched with this aim only and the Prime Minister has said that even if this budgetary allocation goes up to Rs one lakh crore, his government will make a provision for it, Mr. Rajnath said.

CM Chouhan said he will bring a bill in the next assembly session to give Narmada a living entity status. Narmada will be treated as a human being and anyone who harms it will be punished, he said.

After the event, Rajnath Singh and CM Chouhan headed to take part in the Narmada Sewa Yatra and the ‘maha-aarti’.

Related Topics:
River Clean Up Yamuna
Up Next

Can Caterpillars Save The World From Plastic Pollution Crisis?