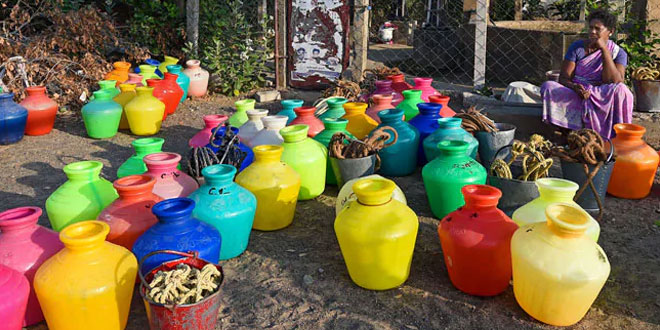 New Delhi: As Tamil Nadu reels from severe water shortage, a Rajya Sabha member on Wednesday highlighted the plight of the people saying “gold is cheaper than water” in state capital Chennai. During a short duration debate in the Upper House on water crisis in the country, T K Rangarajan of the CPI-M (Communist Party of India- Marxist) said that Chennai is the first Indian city “to have gone dry” with the Central Water Commission reporting a rainfall deficit of 41 per cent in Tamil Nadu till June 13 this year. Mr. Rangarajan said, “Most of the Chennai population today depends on water tankers, municipal supply and private supply for drinking water. A tank of private water costs more than one gram of gold. Now gold is cheaper in Chennai than water. This is the truth.”

He claimed that IT sector employees have been asked to work from home and several restaurants have shut down in the state. Mr. Rangarajan said the neighbouring states also have a responsibility to save Chennai. D Raja of CPI said Tamil Nadu is passing through unprecedented water crisis, with people agitating and unrest prevailing in the state.

He said Chennai is facing severe drinking water crisis and the Centre should ensure water-related disputes are resolved. Mr. Raja said that the time has come for the government to try and evolve a national consensus on interlinking of rivers.

Shiv Sena’s Anil Desai said water crisis has assumed gigantic proportions to the extent that it is believed the next war will be fought over water. He said the drought situation in Maharashtra has reached alarming levels and the state government is taking measures to address the issue. Manoj Kumar Jha of the Rashtriya Janata Dal said there is a need for penal provisions to arrest the misuse of water.

Ranjan Bhunia of the All India Trinamool Congress cited a Niti Aayog observation that 60 crore people are suffering due to acute crisis of water in India. He claimed that 84 per centrural households lack piped water access. Ravi Prakash Verma of Samajwadi Party suggested carving a national district-specific blueprint for water conservation. He said the government must ensure that zero effluent discharge policy is strictly implemented by industries.

Janata Dal United’s Kahkashan Perween called for measures to conserve water keeping in mind the interest of future generations and said attention should be paid to rainwater harvesting systems. Banda Prakash of the Telangana Rashtra Samithi said around 21 cities in the country are facing acute drinking water crisis and requested the Centre for speedy disbursal of funds to Telangana to tackle water-related issues.

Speaking in Rajya Sabha for the first time, Prashanta Nanda of the Biju Janata Dal noted that more comprehensive research and funding can help address groundwater depletion. Delivering his maiden speech in the Rajya Sabha, Om Prakash Mathur of the BJP spoke about measures taken by Rajasthan in the past towards water conservation.

Fight Against Air Pollution: A Kerala Municipality Proposes A New Rule, Plant Trees To Get A Permit To Build A House