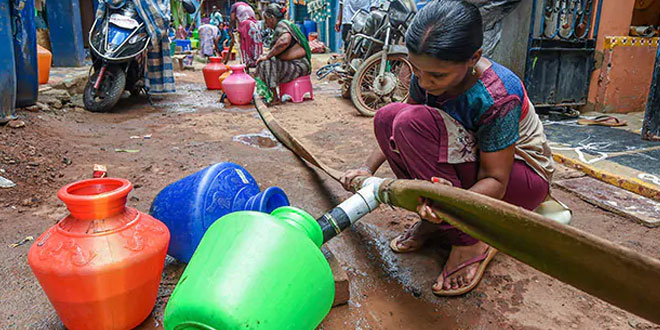 Chennai: With Chennai reeling under severe water shortage, auto-companies which have set up manufacturing units near the city have taken up steps to tide over the crisis including ‘waterless’ cleaning of cars. Four reservoirs that supply water to Chennai, known as the Detroit of South Asia for its thriving automobile industry, have gone bone dry. From Korean major Hyundai to commercial vehicle maker Daimler, the firms are focusing on water conservation measures.

Automobile major Hyundai Motor has installed “extensive water management practices at the factory,” in anticipation of the water situation, the company told PTI. Some measures taken by Hyundai Motor India Limited, which has two manufacturing facilities at Sriperumbudur, include a rainwater harvesting system to transfer collected rainwater to one of the four water storage ponds inside the campus.

Besides, the Korean auto-major has taken up construction of a new pond. Hyundai said it has set up an in-house water treatment plant that recycles 100 per cent of the used water in the campus. It has also launched a continuous awareness campaign to sensitize the employees on reducing water wastage. The company has reintroduced the ‘dry wash’ service enabling customers get their cars cleaned through an ‘eco-friendly’ process. HMIL said it can save up to 120 litres of water per car through this initiative.

Japanese carmaker Nissan Motor said it has halted use of car wash services in Chennai due to the acute water shortage. “Nissan has replaced regular car wash with innovative waterless car cleaning until end of July,” a company release said. According to Nissan, through this cleaning methodology, approximately 162 litres of water can be saved per car. “The water crisis in Chennai needs to be proactively addressed and Nissan is doing its bit by temporarily stopping the water wash facility across our dealerships,” Nissan India general manager (after sales), Atul Aggarwal said.

Maruti Suzuki, which does not have a facility here, said it has already adopted water conservation measures across its workshops in the country. It has achieved three-fold jump in water savings by adopting the dry wash initiative, a company release said. The company saved over 656 million litres of water during 2018-19 across its workshops which is 203 per cent higher as against 216 million litres in 2016-17. Maruti Suzuki India Executive Director (Service), Partho Banerjee said,

Dry wash at our dealer workshops help us do our bit to give back to society. We request over 18 million customers, who visit our workshops every year, to opt for dry wash and help conserve water.

Daimler India Commercial Vehicle (DICV), subsidiary of Stuttgart-based Daimler, has its manufacturing facility in the Oragadam industrial belt, 45 km from Chennai. Responding to a query from PTI, the firm said it was “self-sufficient” to meet its water needs through the effluent and sewage treatment plants located in its campus. The spokesperson said,

The water and waste system network is planned in a way that it helps DICV draw benefit and keep fresh water demand to a minimum.

The 443 acre facility houses a rain water harvesting pond and the buildings are equipped with facilities for artificial groundwater recharge. He said,

This helps replenish the groundwater during the rainy period and serve fresh water throughout the year.

With the use of effluent treatment plant, 60 per cent of the recovered effluent is utilised back in the process and remaining 40 per cent for maintaining the landscape. The facility also has a sewage treatment plant which employs latest technology to treat wastewater, he said. He added,

The output water quality of this system conforms to international standards before being used inside the factory for toilet flushing purposes and gardening.

Ban On Plastic Carry Bags Goes For A Toss In Punjab, 75,000 Kg Of Plastic Seized